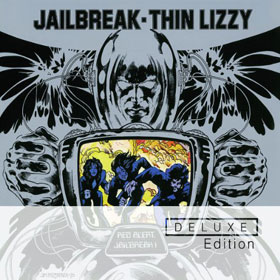 There’s an old axiom that sets forth this idea: nearly every band has at least one good song in them, but few have more than that. If one accepts that assertion, the odds of a band coming up with a great song are a mere fraction of that total. Now, extrapolate that out to the album format: how many groups have a great album in them? The answer is: not many. Thin Lizzy was one, and Jailbreak was that album.

Thin Lizzy formed in Dublin in March 1970. Phil Lynott (bass, vocals, songwriting) and childhood mate Brian Downey (drums) briefly enlisted ex-Them guitarist Eric Bell. They signed with Decca in November of that year and promptly moved to London. They enjoyed a modest UK hit with their first single, “Whiskey in the Jar” in late 1972, but no further hits would be forthcoming (for awhile, at least).

Even on that early single, Lynott’s raspy, impassioned vocal delivery was the central focal point of the band’s sound. And while ‘Whiskey in the Jar” wasn’t an original composition (it was a folk-rock reworking of a traditional Irish ballad) it fit in with the storytelling approach favored by Lynott.

Moreover, the song employed lots of clear, sinewy lead guitar. Even on that early track, the band employed overdubbing to showcase a twin harmonizing lead guitar approach. So the components of what would eventually develop as the signature approach of the band were in place right from the get-go. What remained to develop was the depth of Lynott’s songwriting, the quality of studio production, and a stable band lineup. The band endured those challenges while cranking out a few serviceable albums, none of which charted in the UK or USA.

1976 was the year that Thin Lizzy finally broke through commercially and critically, and they did so in a big way. For Jailbreak, Lynott crafted a suite of songs that had a vague thematic linking. Clear antecedents to his verbose (and grandiose) compositional style include Bruce Springsteen. Like the Boss, Lynott set out to create songs of power and grandeur. In doing so he and his bandmates (Downey plus dual lead guitarists Scott Gorham and Brian Robertson) made one of the most influential hard rock albums of the decade. Besides the more obvious list of acts who took a page from the Thin Lizzy stylebook (Def Leppard, to name one), the group’s lyrical and arrangement style bore a strong influence upon the work of Lynott’s fellow Irishman Bob Geldof. Lynott’s influence is evident in much of the latter’s work with the Boomtown Rats, most notably on cuts like “Rat Trap” and “When the Night Comes.”

The album was (and remains) an aesthetic success on many levels. First, the playing is tight and economical: there’s not a wasted note anywhere on the record. It’s forceful and direct, and producer John Alcock did a superb job showcasing the band’s lean-and-mean sonic attack. (Somewhat surprisingly, Alcock had few other high-profile production credits. He produced Jailbreak’s followup Johnny the Fox [also 1976] and did some work for the Runaways and John Entwistle, but not much else of note.)

But the highlight of Jailbreak is Lynott’s songwriting. He anchored relatively simple melodies with industrial-strength hooks, and wrote the best set of lyrics of his life. The concept of mythologizing musicians as outlaws enjoyed some popularity in the 70s; Paul McCartney and Wings’ own Band on the Run (another possible – albeit minor – influence on Lynott) was released in November 1973 to great acclaim. The comic-book bombast of Jailbreak’s storyline (such as it is) concerns four heroes in the not-too-distant future, and their exploits breaking out of unjust political imprisonment to battle the Overlord. (Those who would criticize Jim Fitzpatrick’s album cover art as cheap or cheesy are simply missing the point.)

While the Springsteen influence is oft-cited, it’s quite likely that Lynott took inspiration (if not unconscious direction) from Pete Townshend. In the decade prior to Thin Lizzy’s Jailbreak, The Who had made a career out of pushing the conceptual boundaries of rock music, and doing so in a forceful, non-effete manner. “A Quick One (While He’s Away),” Tommy, the aborted Lifehouse project that mutated into Who’s Next, Quadrophenia… all of these balanced rock power with a level of ambition that attempted to create narrative, storytelling works. Jailbreak is in many ways Lynott’s response to the unspoken challenge that Townshend’s works set out.

Jailbreak is some seriously macho, masculine music: who needs nonsense like Robert Bly’s Iron John when you’ve got Thin Lizzy’s Jailbreak? Built around the central theme of camaraderie and male bonding, the songs promote an us-against-the-world approach that still holds power some thirty-five years after its creation.

The record all but explodes out of the gate with the crashing opening chord of “Jailbreak;” it’s a hard rock opening vaguely reminiscent of the kickoff of the Beatles’ “A Hard Day’s Night.” From there the song settles into a menacing groove, atop which Lynott spits his lyrics. The song makes it clear: don’t mess with us; we’re on a mission, “Bustin’ out, dead or alive.” The verses are built around a repetitive, three-chord pattern, and the chorus — full of vocal harmonies that subtly reinforce the “we’re in this together” aesthetic – ups the ante. Downey’s drums punctuate the sections perfectly, and the guitarists add brief, effective flourishes of wah-wah guitar. After Lynott screams the command to his compatriots (“break out!”) the song heads into almost progressive-rock territory, with a jazzy(!) time signature, wailing sirens and dueling guitars headed to a crescendo. The song’s macho cred is unassailable: even while staging a prison break, the protagonists stop to accost a lovely lady: “Hey you, good lookin’ female: Come here.” If Lynott weren’t delivering the line with such unironic swagger, the line might come off as a joke. Here it sounds like he means it.

“Angel From the Coast” is a lesser song, but how could it not be? The band pummels along, providing plenty of dynamics, but the song is primarily a vehicle for Lynott’s lyric; moreso than Jailbreak’s other tracks. The now-patented twin guitar assault is the song’s real highlight, and Downey’s fills tie it all together. It’s Jailbreak’s shortest song.

In terms of instrumentation, Jailbreak’s sonic approach is fairly basic and no-frills: guitar, guitar, more guitar, bass and drums. But on Lynott’s “Running Back,” the song is built upon a foundation of (session overdubbed) electric piano, and adorned with sax lines redolent of Springsteen or fellow Irishman Van Morrison. Percussion accoutrements even include handclaps(!), making “Running Back” the most pop-oriented number on the record. Lynott’s na-na-na and tra-la-la vocalizations are a clear nod to Morrison.

The record heads back into Cinemascope storytelling mode with “Romeo and the Lonely Girl.” Propulsive instrumentation gives the song a fist-pumping, driving-fast feel, and the chorus’ vocal harmonies are a highlight. A soaring, searing guitar break extends over the returning chorus.

“Warriors” opens with a chugging, sinister riff, underpinned by Lynott’s underrated bass work. Thin Lizzy rocks hard throughout most of Jailbreak, but “Warriors” may be the hardest rocking track on the record. The simple chord structure allows some wailing solo guitar work, but again a set of melodically interesting (and surprising) breaks elevate the song towards something like proto-prog-metal. And it stops on a dime.

Side two of the original vinyl was kicked off with what became the band’s signature track: “The Boys Are Back in Town.” The monster hit broke the band in the USA. Lynott’s wordy set of lyrics isn’t afraid to sacrifice variety in the interest of making its points: the verses employ an AAA rhyme scheme. Here his writing style is most reminiscent of Springsteen, yet it’s quintessentially Thin Lizzy at its best. Lynott inserts his now-famous bass fill between the guitars’ power chording on the turnarounds, but when the verses kick in, Robertson and Gorham play lots and lots and lots of chords. Few hit songs possess more dynamic tension than “The Boys are Back in Town,” even though the track includes six verses in four and a half minutes. At around the 3:20 mark the band brings it way down, setting the stage for one of rock’s classic dual guitar breaks; here Gorham and Robertson channel the Hunter-Wagner aesthetic used so effectively on Alice Cooper and Lou Reed sessions. All the while, Lynott and Downey lay down a rock-solid beat. The tight harmonies of the lead guitar sing the song out.

“Fight or Fall” takes a breather, dialing back the energy but keeping the melody strong. The track is built around acoustic guitar, with some clever start-and-stop action to add texture. Slide guitar and Lynott’s wide-panned stereo vocals (tellin’ myself / tellin’ myself…) set a memorable vibe. Again here, Lynott uses the AAA rhyme scheme; it adds a subtle insistence to the lyrics, and has the (perhaps unintended) effect of making the sentiments expressed seem less sophisticated than they actually are. Finally, the album’s underlying theme is explicitly voiced in the song’s outro: “Brother, brother.”

It’s all-in for “Cowboy Song.” Warbling campfire-style harmonica accompanies Lynott as he spins his tale of bustin’ broncs for the rodeo. Here the bassist aims to create a song of epic and mythical proportions. His expansive first-person lyrics are aided in no small measure by a strong melody, and some of the record’s most melodramatic guitar work. Vocal harmonies on the chorus (“Roll me over and turn me around…”) match up effectively with the similar approach the of dueling guitarists. When Gorham and Robertson duel, everybody wins: three minutes in, they drop back to give space for Lynott’s vocal, and then they come back in with some more lean licks. Then — as is their wont — they explode for an instrumental verse and chorus.

A martial, heavy metal arrangement serves “Emerald” well. The album closer is constructed around a dual-guitar riff that runs up and down the scale. Bands like Metallica built entire careers around the sort of approach used on “Emerald.” And while in print it might sound like it’s an overused technique on Jailbreak, a harmony lead guitar line followed by an epic guitar battle (in stereo!) provides the rock equivalent of hand-to-hand combat on the windswept plain.

And then it’s over. At a shade over thirty-six minutes, Jailbreak is a concise statement of the best that Thin Lizzy – and, for that matter, rock in the mid 1970s — had to offer. The band went on to make other enjoyable albums (perhaps most notably the 1978 double LP Live and Dangerous. But Jailbreak stands as the band’s finest hour, and a crowning achievement of 1970s hard rock.

A look at the bonus disc included with the Jailbreak 2011 reissue is here.