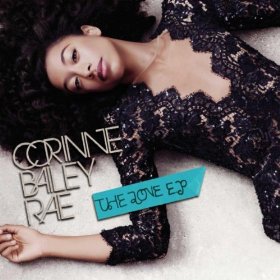 Corinne Bailey Rae has established herself as a formidable vocalist (on her self-titled 2006 debut) and a credible songwriter (on 2010’s studio followup, The Sea). With her newest release, the (possibly stopgap) covers collection The Love EP, Bailey Rae stakes a claim as an effective interpreter of the work of others. This thematically cohesive collection (the songs’ lyrics all deal with love in one way or another) was timed for release to capitalize on Valentine’s Day.

First up is Prince’s “I Wanna Be Your Lover” from 1979. The instrumentation has a vague sonic connection to Steely Dan’s “Peg,” with its intentionally dated synthesizer textures. Bailey Rae’s sultry, kittenish delivery is head and shoulders above much of what is passed off as dance-pop in the 21st century.  Of course, starting with a sturdy tune and an infectious groove helps a lot, but assured vocal delivery makes this an effective performance overall.

A major stylistic left-turn is next. When Tanya Donnelly and her bandmates in Belly cut “Low Red Moon” in 1993, they probably didn’t expect it would get covered eighteen years later. Good for them, though. Bailey Rae’s band delivers the song with just the right amount of swagger, infusing the arrangement with a James Bond 007 vibe. Lyrics aside, it’s not a stretch to imagine this version as the soundtrack to a Bond title sequence.

If Bailey Rae is out to make the point that her tastes cover a wide range, her cover of Bob Marley’s “Is this Love” helps make that point. The expected reggae ambience is in fact dialed back; the song’s feel is in many ways closer to Memphis/Stax. There’s a gospel vibe in the arrangement as well: understated piano and tight vocal backing help conjure an image of Bailey Rae singing the song with her eyes shut.

Bailey Rae got the opportunity to perform at one of the recent ceremony/galas honoring Paul McCartney. With that as a backdrop, her Macca tune on The Love EP is “My Love” from Red Rose Speedway. Here she invoked an intimate vibe rather than the sweeping MOR arrangement of the original. A bit of understated synthesizer helps peg the song to its early 70s roots, but Bailey Rae’s seemingly-effortless vocalizing brings it back to present-day.

Those four songs clock in at a total of just over fifteen minutes; perhaps feeling that was a bit slight for an EP, Corinne Bailey Rae added on a fifth song. It’s a live rendition of the chestnut “Que Sera Sera,” originally a hit for Doris Day (and used memorably – if incessantly — in Alfred Hitchcock’s 1956 remake of his own film The Man Who Knew Too Much). Not unlike in the Hitchcock movie, the song eventually wears out its welcome. The tacked-on “Que Sera Sera” nearly doubles the length of the EP, and not so much for the better. Taken at a glacial pace, the song does have that smoky, late-night end-of-the-set feel, but the song’s melody is deconstructed almost beyond the point of recognition. Some tasty organ and lead guitar adds interest, but a shorter edit (maybe, y’know, just seven or eight minutes) might have been more effective.

As a gift to her fans while the next album is crafted – or as a Valentine’s Day gift – Corinne Bailey Rae’s The Love EP is okay at its worst and excellent at its best.