Bill Kopp: In my review of Modulator I said, “Gunn’s guitar squawks and screams as if it’s being strangled rather than played.” You subsequently tweeted that line. I meant it as a complement and suppose that you took it as such. What sort of goal do you have texturally when playing? I mean, of course it’s different for every song, but is there any sort of general aesthetic guideline you follow?

Trey Gunn: No. The most important thing for me is that the musical gesture is disclosed, and that it sounds good. For me, texture is all about whether it sounds good. I have no principles that I can operate on, or even discuss. Because if it sounds good, it sounds good. And when it doesn’t sound good to me, I change it. It’s one of those things where you know right away. It’s a case where you know when you’re working with the people you should be working with. You’re in agreement. When I’m working with someone and something is recorded or played, and we all go, “Eww, that doesn’t sound right” – or if we agree that it does sound right — then I know I’m working with the right people. It’s like a litmus test. If there’s a lot of variation in opinion about how something sounds, hmm…better to find somebody else.

BK: What percentage of your guitar work that ends up on a recording would you say is improvisationally based?

TG: It does depend a lot on the project. But I do work a lot from improvisation. I play and things just sort of fall out, but there’s generally a shaping process. For example on Modulator, I would play along with Marco, and I’d find a musical gesture. And it might not line up. So I would go back in and find out what notes should be played to match the rhythm. So improv is kind of a magic doorway for me. 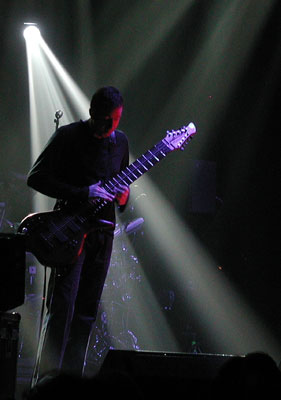 But to go onstage and just improvise is so dreadfully boring and pretentious, even with the best players. At least 75% of the time. I find it dreadful, the idea of getting together to jam with musicians. It’s something I’d run away from. So I have a very tempered sense of the concept. Even if start with an improvised line, I sit down and construct a strictly developed piece from that idea.

BK: So while it might spring from improvisation, it ends up structured.

BK: You employ a wide variety of non-traditional instruments: Warr guitar, touch and fretless guitars, etc.  Do you find that the standard six-string electric or acoustic guitar is too limiting an instrument for the sound and textures you have in your head? Or do you just like to pick and choose an instrument based on where you’re trying to go musically?

TG: They’re different instruments for me. I have an electric guitar, and I have an acoustic guitar. They’re tuned kind of funny, but I have them. And there’s a particular way of playing them, one that’s completely different than with the touch or Warr guitars. So I pick them up when I want that particular instrument. Bt I don’t ever take those out onstage. The Warr guitar is very flexible; it gives me all of the textures I want, all the possibilities I want to take onstage with me. There’s lots of variety for me, and for the audience.

Certainly, one of my goals is developing ways of playing the Warr and touch guitars. That’s my particular work; I don’t have that kind of work on a regular guitar. That’s somebody else’s work. And the next evolution of the touch is guitar is to be horizontally played. I’ve been working for about a year and a half, kind of building up a body of technique. I’ve been doing lots of experiments related to what that mean, playing with the instrument horizontally in front of me. I’m doing a lot of R&D on that. 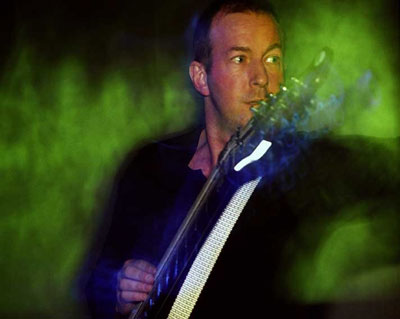 BK: Besides that, what sorts of projects are in the hopper or on the horizon for you now?

TG: I’m at a little bit of a…I don’t want to use the word “lull” because that sounds negative. The Modulator project really zapped my capacity. It was a real challenge that called upon my writing and production chops threefold. And I’m still recovering from it!

I do have some interesting things coming up, which are kind of surprising. I’m not touring that much; I was just playing in Russia the last couple of weeks. I have a project with Percy Howard and Vernon Reid. I’ve worked with both of them before, but Percy’s stepping it up this time by bringing in another guitar player as well. That’s in March 2011.

Also in March I’m going to Sweden to play a one-off show with a crazy drummer. The reason it’s working is because I’ve been invited to a music exposition with a bunch of young musicians all coming in. So I’ll be teaching there and doing a show. I’ll be coaching, really, helping musicians to find where their passion is; in fact it’s really different from teaching. With teaching you sort of have secret information that you’re passing on. With coaching, you’re really just listening to them and helping them. So this Swedish thing is a little bit of an experiment. But they want to have me, and I want to go.

And there’s something else, but I can’t remember. It’s mostly live stuff; I don’t have recording projects lined up soon, although Pat Mastelotto and I will hopefully start a new Tu record this year. Other than all that, I’m sort of retreating into my cave for the winter, and seeing what comes.