Album Review: The Dovells – For Your Hully Gully Party / You Can’t Sit Down 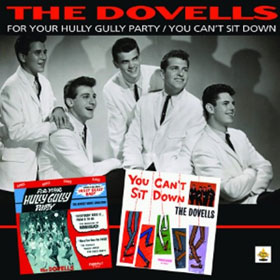 If The Dovells are remembered at all, it’s primarily for the 1961 hit “Bristol Stomp.” That song, written by a pair of executive staffers at Cameo-Parkway, was a chart-topper for the group. The Dovells were essential an a cappella group supported by studio musician backing. In the wake of the song’s success, more material in a similar vein was expected. These albums are the response to that demand.

Though primarily a singles act, The Dovells managed to release a few albums; the second and third of these have been combined an released on CD as For Your Hully Gully Party / You Can’t Sit Down.  The two dozen songs are straightforward partying frat-rock; the vocal arrangements aren’t especially inventive, but they’re ideally suited to the music. It would be an excursion in hyperbole to characterize For Your Hully Gully Party as a concept album, but there’s clearly a theme at work here: songs like “Hully Gully Baby,” “Country Club Hully Gully” and “Hully Gully Square Dance” tell the story (such as it is). The latter features some mildly amusing (but ultimately a bit stale) vocal impressions of everyone from Dean Martin to James Cagney. A sequel of sorts, “Stompin’ Everywhere” attempts to recount the saga of the “Bristol Stomp” sensation; various city names are checked off.

The songs on You Can’t Sit Down aren’t confined to songs about dances; there’s even a Chuck Berry cover (“Maybelline”). Employing a then-typical approach, the Dovells covered songs that were currently charting for other artists: Jackie Wilson’s “Baby Workout” and Jimmy Soul’s “If You Wanna Be Happy.” The Dovells’ versions are something short of immortal, but they’re credibly performed.

On one level, this is the sort of music that The Beatles saved us from. Though these songs were recorded between 1961 and ’63, there’s a distinct 1950s feel to the whole package. Of course what people think of as “the sixties” in musical terms really began in February 1964. There’s little in the way of inventiveness in the playing, writing or singing on For Your Hully Gully Party / You Can’t Sit Down. But ambition wasn’t the motivation; these songs were simply designed to serve as the soundtrack for fun. And on that level, the music is as successful as it ever was.