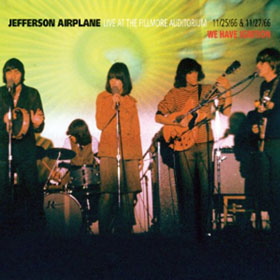 By November 1966 the Jefferson Airplane were on a definite trajectory toward the top of their game. Grace Slick had joined about six weeks earlier — replacing Signe Anderson — and had quickly worked her style into the group’s sound. On this pair of archival soundboard recordings, the band is captured onstage at San Francisco’s Fillmore auditorium.

While Surrealistic Pillow hadn’t yet been released (sessions were under way during this period) the band was already performing much of that record’s music onstage. The manner in which the songs are delivered shows a stunning level of confidence on the part of the band: Marty Balin and Grace are especially assertive in their performances, all but daring the audience to give them less than total attention.

The two shows documented on this set cover the first and last shows of a three-night run at the Fillmore. The Airplane topped a bill that also featured Moby Grape and James Cotton’s band. On these dates the Jefferson Airplane covered a wide range of styles, but as always, those styles were bent to suit the Airplane’s approach. “Bringing Me Down’ is a jugband number. Paul Kantner’s “DCBA-25” features a Grace Slick vocal line that she would recycle with greater success some nine years later with Jefferson Starship’s “Fast Buck Freddie” (even though the latter song was written by Starship’s Craig Chaquico).

For a set not originally intended for release, the recording is excellent. The vocals are a bit “dry” and untreated, but in actuality this gives the performance a more intimate quality. Jorma Kaukonen’s chiming electric 12-string isn’t quite as out front in the mix as it would be on studio versions of these songs, but it’s clearly audible. As a whole, the band is tight and largely resists the temptation to head off into exploratory jam territory. The notable exception is the pair of songs that close the second disc. A brief instrumental “My Grandfather’s Clock” and an extended psychedelic workout of Fred Neil’s “The Other Side of This Life” were performed as a sort of encore, allowing a photo shoot.

This set is primarily of interest to Jefferson Airplane fanatics and/or completists, in part because there’s a fair amount of overlap between the two shows. “Plastic Fantastic Love,” “High Flyin’ Bird,” “The Other Side of This Life,” “White Rabbit” and “3/5 of a Mile in Ten Seconds” are all presented twice.