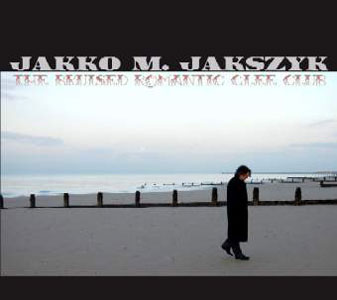 Jakko M. Jakszyk has an impressive musical pedigree, and is highly regarded in progressive rock circles. Perhaps most notably in a career filled with highlights, Jakszyk served as lead guitarist and vocalist in the King Crimson authorized-offshoot project called the 21st Century Schizoid Band. He was also a member of Level 42 in the 1990s, though he never appeared on a studio recording).

Jakszyk released four solo albums in the 90s, none of which are easy to locate as of this writing. His latest, however, The Bruised Romantic Glee Club, is readily available and worth seeking out for admirers of his adult pop-cum-prog style.

Though Jakszyk is proficient on a number of instruments, he enlists the help of a number of friends and musicical associates for his latest record. The most recognizable of these names include Mel Collins, Robert Fripp, Ian McDonald and Ian Wallace (all late of King Crimson — and all save Fripp —  Jakszyk’s comrades in 21CSB) and Canterbury notables Hugh Hopper (Soft Machine), Dave Stewart (Egg), Danny Thompson (Pentangle) and Gavin Harrison (Porcupine Tree). Fans of UK prog probably need not read the remainder of this review: that lineup will likely tell them that this 2CD set needs listening to.

Others will enjoy it as well. While The Bruised Romantic Glee Club possesses a definite and unmistakable air of progressive rock, it’s firmly rooted in a pop sensibility, making it the sort of record that a prog fan can enjoy with his wife or girlfriend (but not both, of course).

Things rarely stay rooted in the good old 4/4 on the set, but there’s enough repetition of unusual time signatures to give them something approaching toe-tapping vibe. Jakszyk seems intent on delivering up a wide array of styles within his chosen idiom: “When Peggy Came Home” sounds like a Gilmour-era Pink Floyd track, complete with soaring lead guitar, sustained keyboard pads and “found” voices. The Floyd style crops up again on “Srebrenica,” (see what I mean about weighty topics?) a track on which Jakszyk does everything. Jakszyk’s voice naturally occupies a space close to that of Greg Lake, lending a warm and vaguely familiar feeling to songs; this is the case even when listeners are hearing them for the first time.

The subject matter on The Bruised Romantic Glee Club is somber, serious and weighty; the songs concentrate on traumatic and jarring events in Jakszyk’s life. The titles tell the story: “No One Left to Lie To,” “The Things We Throw Away.” Yet the heavy lyrical content is delivered with catchy, melodic (generally) midtempo music that sweetens it just enough to go down easy. Still, he makes liberal use of the word “bullshit” in his lyrics.

In seeming tacit acknowledgement that the songs on the first disc concern themselves with breakup, loss, regret and similar themes, Jakszyk takes the step of including a second disc full of covers. Taken together, these selections form something of a musical travelogue through key points in Jakszyk’s personal musical upbringing. Works by Henry Cow, Soft Machine and King Crimson are featured, but in no case does Jakszyk simply cover the songs. On his reinterpretation of “Pictures of a City” from the second King Crimson long player, he plays a “sitar guitar” and enlists the aid of Pandit Dinesh on tabla. Dinesh, as Jaksyk explains in the self-penned and revealing liner notes, was unfamiliar with the song before the studio date. A decidedly Indian flavor unencumbered by any sort of misplaced faithfulness to the original is the happy result.

An overall atmospheric endeavor, The Bruised Romantic Glee Club is a rewarding listen for those who enjoy expertly played and arranged midtempo songs deeply imbued with melancholy and lightly tinged with progressive elements.