Album Review: The Mixtures – Stompin’ at the Rainbow 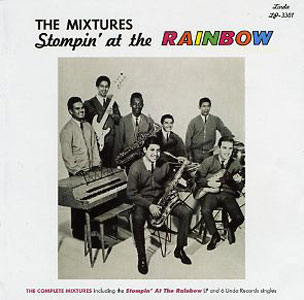 There’s long been a school of thought that pushed the notion that rock nearly died in the late fifties. The argument goes something like this: Buddy Holly died in the plane crash, Elvis went into the army, Little Richard found Jesus, Jerry Lee Lewis discredited himself with the whole child-bride episode, Chuck Berry got busted, and a bunch of the other guys went country. The musical landscape was soon repopulated with insipid, assembly-line pop idols put forth by a music industry that had (almost) lost control of the whole shebang when those early rockers exploded on the scene. Acts like Bobby Vinton and Frankie Avalon were the cigar-chewing bigwigs’ way of getting the market back under their thumb. Only the Beatles, this argument insists, saved rock and roll from total death.

It’s a compelling argument, and one not without some historical merit. Those pre-Beatles pop stars were pretty goddamn lame, most of ‘em. People like Pat Boone certainly did sand off the rough edges of rock and roll, making musical pabulum that was safe for middle America. But this argument conveniently sidesteps the existence of many fine R&B inflected groups working dances and clubs in those years. Some remarkable, exciting music got made, performed and (occasionally) recorded before John, Paul George and Ringo came to our shores to save us all in early 1964.

The Mixtures were one of the bands making this exciting music. The band chose a name that reflected the racial diversity of their lineup: the group was (as the liner notes point out) “at different times comprised of African Americans, Hispanics, Asians, Caucasians and a Native American.”  Not to make too big a deal of it, but in 1960 this was a big deal. This was some years before the Rising Sons (with Taj Mahal and Ry Cooder) or Love (featuring Arthur Lee and Bryan MacLean. Notably, both those groups and The Mixtures plied their trade in the (relatively) socially progressive region of southern California.

But focusing on the racial makeup of the band is to give short shrift to the music they made. And the fact is that if The Mixtures were merely an integrated band, they would merit little more than a footnote. As it happens, the group released a live album in 1962. Stompin’ at the Rainbow is a preserved example of the six-piece’s live set from that era. It’s a varied set that shows the band’s party instincts as a major influence in crafting the set list. After Bob Eubanks (in those days a concert promoter; in later years he’d gain notoriety as host of The Newlywed Game) introduces the band, they launch into their high energy set.

Long on covers (“Peter Gunn” theme, the Mar-Keys’ “One Degree North”), the set is designed to extract maximum dancing from the crowd. And form the sound of things, it worked. While the band was adept at honking instrumental numbers, they were equally skilled at delivering the goods on vocal-led numbers. A rock’n’roll medley is the centerpiece of the carefully-sequenced live set; it’s essentially a Little Richard mini-tribute, complete will trilling piano and lockstep horn chart.

With Wally Heider – already an established force – running the recording equipment, the goods were smartly committed to tape. Equipped with multiple vocalists capable of taking the lead, The Mixtures could effectively cover any number of styles. The Rainbow set would be notable if only for documenting a good night onstage; it does that, but also serves as a showcase for a band that could travel from one to another style with ease. At the close of the instrumental “Surfers Stomp” the crowd responds with stomps of their own.

Despite the tight playing, there’s nonetheless a welcome looseness to the performances. On “Peppermint Twist” the banking vocalists occasionally get the words a bit wrong; this only adds to the charm. The band – clearly sensitive to pacing –calms the corwd down after a series of raucous and upbeat numbers, making time for a slow dance or three. They close the show to an emotional reading of “That’s All I Ask.” With a quick “thank you,” the record fades on crowd applause.

The new archival release of Stompin’ at the Rainbow includes a dozen bonus tracks; with the exception of a two-sided single release of  “The Rainbow Stomp,”  all of these songs have previously appeared only on 45rpm singles. They’re all studio recordings dating from 1962 through 1964, and like the live set consist mostly (but not exclusively) of instrumental party numbers. When the last of these – Linda Records #115, “The Last Minute” b/w “Sen-Sa-Shun” – was released, it had been less than five months since the conclusion of the Beatles’ three-consecutive-weeks run on The Ed Sullivan Show. Things really did change then, but party music in the wide-ranging, good-timing style of The Mixtures would enjoy a few more years of popularity in dancehalls.

One quick aside: Fans of the Pacific Northwest strain of early 60s rock (see also: Revere, Paul) will hear some sonic similarities to that style in the Mixtures’ arrangements. Where Revere used a piano (this was long before the Raiders’ Vox organ era), the Mixtures used the Wurlitzer Electric Piano, then a mainstay of R&B music, and largely popularized by Ray Charles.

As a key exhibit against the argument outlined at this review’s start, Stompin’ at the Rainbow is a worthwhile piece of plastic. It also happens to be a pretty fine party record in that post-early rock / pre-Beatles style.