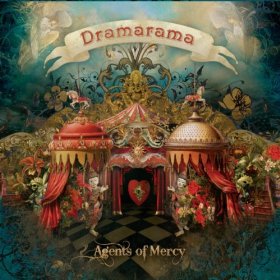 Swedish quintet Agents of Mercy’s album Dramarama occupies that curious yet sweet spot between progressive rock and pop-rock. The group’s sonic approach draws on the usual suspects, but if they sound like any other group, it’s post-Peter Gabriel era Genesis before that group went (too far) in the pop direction.

That Nad Sylvan is a vocal ringer for Phil Collins certainly adds to the similarity. The group’s progressive compositional tendencies are kept tethered to the ground by an assertive yet straightahead rhythm section (Jonas Reingold on bass, and drummer Walle Wahlgren). Renowned guitarist Reine Stolt (of Flower Kings, Transalantic and who-knows-what-else) adds plenty of melodic yet head-spinning licks throughout.

A track like the album opener “The Duke of Sadness” moves through different sections; some parts are more pop than others, and bits evoke the style of The Lamb Lies Down on Broadway, but in the end the track is an exemplar of prog-leaning music that remains accessible to more mainstream tastes.

Majestic, expressive keyboard work courtesy of Lalle Larsson gives Dramarama much of its prog credentials. The liners list his arsenal — grand piano, B-3, Minimoog, Rhodes, Wurlitzer electric piano, synths – but a keen listener would have spotted most or all of those instruments in any event.

The melodies across the album’s dozen tracks are all memorable, and various bits will likely lodge themselves in the listener’s memory. Designed as a complete listening experience, Dramarama’s songs tumble into one another. But a few tracks do stand out. “Peace United” swaggers like Led Zeppelin’s “Kashmir” minus the world-music trappings, then it veers (quite pleasingly) into an And Then There Were Three-era Genesis vibe.

Some lengthy and tasty synth soloing – coupled with a soaring wah-wah guitar solo —  is a highlight of “Journey.” The anthemic “Gratitiude” sounds like Collins, Rutherford and Banks joined by a fretless bassist. With its Mellotron-ish tones, “Meet Johnnie Walker” may evoke mental images of – of all things – Klaatu and/or Electric Light Orchestra. It’s also a contender for best album track among a bunch of fine ones.

In general the lyrics on Dramarama – composed by Stolt, Sylvan or (occasionally) both – concern themselves with upbeat, positive themes. While not nudging the subject matter in quite the religious/philosophical direction of Transatlantic, it’s mostly about life as a quest and so forth. But here the pop emphasis keeps things nicely balanced; Dramarama safely avoids progressive rock’s tendencies toward (on one hand) lyrical self-importance and (on the other) treating the lyrics as an afterthought.

If you’re a prog fan who wants to draw a pop-oriented friend into the fold, Dramarama is a good entry point, as its charms will give you both plenty to like.