Book Review: The Beatles vs. the Rolling Stones

The Beatles vs. the Rolling Stones: Sound Opinions on the Great Rock’n’Roll Rivalry
by Jim DeRogatis and Greg Kot
Voyageur Press; 190pp. US$35.00 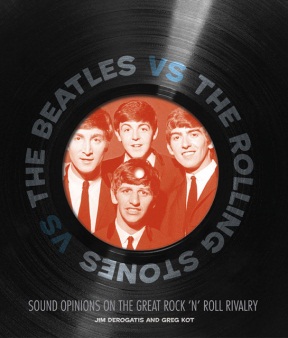 My teenage years started in the mid 70s, some seven years after the Beatles announced their breakup. But some remnants of the sixties mindset remained even then: you were implicitly expected to pick a team, as it were. Where and when I grew up, you were either a Beatles fan, or you liked the Rolling Stones. Not both.In those days, the term “classic rock” had yet to enter common lexicon, and of course the Stones were still together, making music. (Oh wait: they still are? Well, that may technically be true, but in 2010 they indisputably suck.)

You can guess which side of the argument I came down on. As a teen I thought of the Stones as crude, loutish, and far too reliant upon visual gimmickry (they were pretty glam in the 70s, you might recall). Their music struck me as hopelessly derivative, even then; hell, essentially a cover band, their first single was given to them by none other than Lennon and McCartney!

My friend Randy was (and probably remains) a Stones fan. I suspect he found the Beatles too cuddly, contrived and nonthreatening. Plus, he could have argued, the Beatles had broken up. The Stones were still putting out great, timeless rock music like “Miss You” and “Emotional Rescue.” (Oh, wait: that evidence is more supportive of my point of view. For me the last gasp/death rattle was 1974’s It’s Only Rock’n’Roll.)

Of course both viewpoints had some merit, and both were hopelessly shortsighted. But that’s how it was.

And thanks to Jim DeRogatis and Greg Kot, the old wounds have again been opened. These music scholars’ good-natured back-and-forth about the relative merits of the two groups – the “Great Rock’n’Roll Rivalry” as they might (and do) say – form the basis of the new book The Beatles vs. the Rolling Stones.

DeRogatis is the former pop music critic for the Chicago Sun-Times, author of several well-regarded and highly readable books on rock music. Kot was (and remains) Jim’s counterpart at the Chicago Tribune. Together the duo has hosted a weekly radio program called Sound Opinions. Put simply, these guys know their stuff, and they convey that knowledge in a user-friendly manner.

The book is structured in a clever way. Consisting essentially of the edited transcripts of a friendly Kot-DeRogatis argument, the book is divide into chapters that examine the rivalry from a number of angles, through a variety of lenses. Who was the better drummer: Charlie Watts or Ringo Starr? Who wrote better songs: the Glimmer Twins or John and Paul? Which was the greater double LP set: Exile on Main Street or The Beatles? As a reader, you may not always agree with the answer to each. In fact, the authors themselves often don’t agree. Sometimes they both come down on one side, sometimes they’re at adamant loggerheads, and occasionally they call a draw. But good cases are always made.

If The Beatles vs. the Rolling Stones were simply that – the conversation between these two writers – it would be worth reading for fans of either group. But the book itself is really something special. On my bookshelf I have literally dozens of Beatles-related books (many of which are commented upon in this book, as it turns out), and yet there are scores of photos in the Kot-DeRogatis book that I’ve never seen before. The book is beautifully laid out; it’s essentially a coffee-table tome that happens to have lots of informative, entertaining text as well. The cover sports one of those groovy two-in-one photo deals (like on old 3-D baseball cards) that displays either the Beatles or the Stones, depending on one’s viewing angle.

The Beatles vs. the Rolling Stones makes a great gift idea, but for fans of the Beatles, the Stones and/or excellent, well-informed rock criticism and history, you might want to dispense with the whole gift concept and just pick it up for yourself.