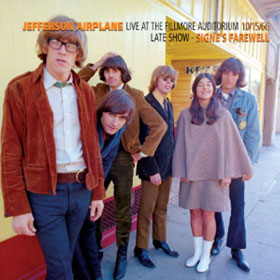 Hardcore sixties music fans and/or those with a serious appreciation for Jefferson Airplane will be familiar with this recording; it’s circulated amongst collectors for many years, as part of the title Transitions (among other titles). Even before the days of CDRs (let alone torrent sites) the show was traded on Maxell cassettes. And for good reason: it documents the Airplane’s final performance with Signe Anderson on vocals. The following night Grace Slick would make her onstage debut with the band; that show is also enjoying official release and will be reviewed separately.

Early Airplane gigs show the San Francisco group in a jammy mood. Even in 1966 they weren’t afraid to perform long, exploratory, improvisational pieces onstage: the group already had a serious local following prepared to follow them on whatever musical embryonic journey they might initiate. But opening with a jam? Pretty gutsy stuff. This show opens with an instrumental track (here titled simply “Jam”) that runs over nine minutes.

The thing about these sorts of jams is that they really are without-a-net performances. When you don’t know exactly where you’re going, you might tap into inspiration, and you might fall flat. The latter is more likely. Here the Airplane engage in an ebb-and-flow piece that allows space for each of the players to take a shot at leading things. More often than not it does work, and it definitely distills the group sound; chances are most keen listeners would identify it as the Airplane after hearing just a few seconds of the track.

From there, things get more straightforward. A groovy, in-the-pocket reading of “3/5 of a Mile in 10 Seconds” features Marty Balin on lead vocals, with Signe handling the harmonies (though Paul Kantner is clearly heard as well). Not to take away at all from what Grace Slick would bring to the band, but Signe’s vocal approach here shows that Grace didn’t exactly invent the style. Jorma Kaukonen‘s whammy-filled licks are the icing on the cake; the track is taken a bit slower than the studio version (not yet released as of this October ’66 date), and doing so brings out the — dare I say — funkiness of the number. For more than six minutes the band finesses the number, and it never drags.

Right from its first few bars, the electric jugband styled “Runnin’ Round This World” from the group’s debut album gets an immediate round of applause form the Fillmore crowd. Even though Jefferson Airplane Takes Off had only been released two months earlier, the crowd is very familiar with it. The band plays this one straight.

A proto-Vanilla Fudge version of J.D. Loudermilk‘s oft-covered chestnut “Tobacco Road” serves primarily as a vocal showcase: the band’s trademark dual vocal approach — imitated but never improved upon by such acts as HP Lovecraft — is in full flower here. Chiming guitar (sounds like a 12-string Rickenbacker to me) from Jorma shows shades of the modal style Jim (Roger) McGuinn brought to the Byrds’ “Eight Miles High.”

The waltzing “Come Up the Years” is a successful synthesis of heavy and fragile. Jack Casady‘s bass executes a countermelody that is every bit as interesting as the (nearly unrelated) vocal line. Kantner’s “Go To Her” didn’t end up on an official Airplane release until many years later, but its inclusion here shows that the band was in full creative mode: they had more quality material than their studio albums could hold.

Donovan (Leitch) famously name-checked the Jefferson Airplane on his song “Fat Angel,” and the band returned to complement by making their own version of the song a centerpiece of their live sets. A spooky, brooding and understated intro puts Jorma’s guitar out front. Paul Kantner takes the lead vocal, sounding nothing like he would in later years. At seven-plus minutes, the version here stretches out instrumentally; even when Kantner’s singing, there are interesting things going on with the instruments. Spencer Dryden plays a drum part almost completely bereft of cymbals.

Having gotten the crowd mellowed out with the extended “Fat Angel,” the band slips into another longish number, “And I Like It.” A blues slowed down nearly to the breaking point, this one falls into the “you probably had to be there” category.” Balin over-emotes just a bit.

Joined in progress (the source tape was missing the start), a cover of the Wilson Pickett hit “In the Midnight Hour” showcases a tasty lead guitar solo, and showed that the Airplane could be excellent interprets of others’ material on those occasions when they chose to do so. After that number, Balin takes a few minutes to offer a heartfelt tribute and farewell to Signe Anderson. It’s worth noting that up to this point in the concert she hasn’t been given a solo lead vocal. She steps to the mic to offer thanks, but it’s a very brief speech (ten words or so).

When Anderson does finally take the lead vocal, the crowd is ready for it. From the opening guitar strains of “Chauffer Blues” the crowd roars. Her vocal delivery stands in sharp contrast to her muted pre-song speech: it’s as forceful as the speech is muted. She joins Marty for the closer “High Flyin’ Bird,” another textbook example of the group’s patented dual lead vocal. The recording ends with Fillmore owner Bill Graham offering his own farewell to Anderson. The band would return to the Fillmore the following night for two more shows (this night’s recording is from the late show), and both of those performances were also enshrined on tape.

Considering that the set was never meant for official release, the sound quality is good. A soundboard recording, it’s pretty much free of defects and hiss, and serves equally well as a historical document and a rocking good concert recording. Craig Fenton‘s liner notes are good, but they don’t add a lot to the understanding of the set. An essay from Airplane scholar/expert Jeff Tamarkin would have been more welcome. The digipak is a nice touch, and the photo’s great.