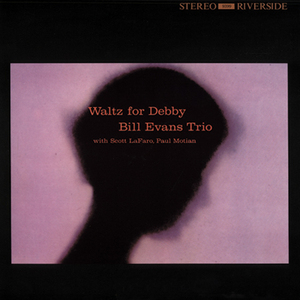 I’m not a jazz aficionado, but I know what I like. And the 2010 Concord reissue of Bill Evans Trio’s Waltz For Debby, this I like. Recorded live at the Village Vanguard in NYC in summer 1961, it’s an easy vibe to like. Evans’ effortless but stunningly expressive piano is accompanied by Paul Motian’s drums and Scott LaFaro’s upright bass. Motian feels little need to lay down a beat or anything approaching one: as often as not he swirls his brushes around on the snare for just the right sympathetic accompaniment. And LaFaro – at one of his last dates before perishing in a car crash – understands that the spaces between the notes are every bit as important as the notes themselves.

The audience can be heard clearly throughout the set; they murmur a bit here and there while the trip lays down their performances. But rather than being a distraction, their sonic presence only adds to the organic ambience of the set. These guys are really playing this stuff!

The songs are tight and exploratory all at once; on the title track, Evans and LaFaro play seamlessly off of one another. This is music that somehow knows where it’s going, even if the players don’t. A variety of tempos afford great shade and light to the number. “Waltz for Debby” swings one moment, shuffles the next, gets all moody the moment after that. It’s amazing, highly textured music. LaFaro’s bass solo comes out of nowhere, and Evans instinctively reacts by dialing back his performance to allow space for it.

Not one member of the trio is afraid to head off in his own direction, and whenever one chooses that path, the remaining two react appropriately. While not exactly a showcase for soloing, the trio in this performance always allows ample space for whatever’s happening musically.

The 2010 reissue is packed with four bonus songs, three of which are alternate takes of songs from the same set. The other musical track is “Porgy (I Loves You Porgy)” from, of course Porgy and Bess. Original producer Orrin Keepnews provides a new revelatory and self-effacing set of liner notes to complement the originals. And the stereo separation is nothing short of amazing, especially for a live recording from 1961.

This is music that’s successful on any number of levels: one can sit and absorb it intensely, grooving on every note, ever flam, every pluck of the bass string. Or one can turn the volume down and enjoy a wonderful soundtrack to a dimly-lit evening, morning coffee…whatever. Joyous, contemplative, brooding, cerebral, exultant: Bill Evans Trio’s Waltz for Debby is all of these and more.