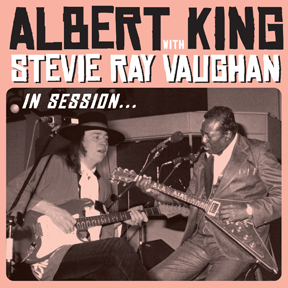 Whenever the phrase “musical summit” starts being bandied about, my bullshit meter powers up. The well-worn phrase all too often is shorthand for “cynical crossover marketing tie-in” or “desperate bid to regain relevance.” I’m happy to report that the new CD+DVD pairing of Albert King with Stevie Ray Vaughan is the exception that proves the rule.

This archival release documents a rare musical collaboration between two esteemed bluesmen in 1983. While the audio was released in the 90s, the video of the show — broadcast in Canada — has never been released until now.

In 1983 Albert King was getting up there in years. His highly regarded work for Stax was a decade in his rearview mirror by that point, yet he was still a vital performer. Prior to this date he had cut an album for Fantasy called Crosscut Saw, and he’d eventually cut his final studio album, I’m in a Phone Booth, Baby a year later. His backing band for both sets played with him on this CHCH-TV performance as well, and throughout they manage the high-wire act expected of blues sidemen: support the lead player with sympathetic, muscular backing, but play in a way that’s still interesting enough on its own. Vaughan was riding high on critical acclaim for his own debit album, Texas Flood.

The young whippersnapper Stevie Ray Vaughan was paired with king on the program In Session as part of the producer’s vision of bringing together complementary but slightly unexpected pairings of performers. While King was certainly aware of SRV prior to this date — Vaughan had sat in with King onstage once — the elder bluesman is shown to be caught a bit off guard by just how fine a player Vaughan is.

Never one to shower other players with effusive praise, King allows at one point that SRV is “pretty good.” But the small complement is delivered in such a way that it’s clear King recognized Vaughan’s artistry. Later in the program King says something along the lines of being nearly ready to let Vaughan take over, and while he might have been referring to the session at hand, one wonders if he was in fact thinking of the bigger picture.

This set is not an evenly-divided showcase of the songs of both men. It’s an Albert King showcase, with versions of “Call it Stormy Monday,” “Blues at Sunrise” and “Don’t Lie to Me.” But throughout, it’s truly a musical collaboration. While there’s plenty of tasty soloing from both King and SRV, what’s perhaps most remarkable is how each of them reacts musically while the other solos. Let’s face it: there’s not a lot of recorded evidence of either axeman’s ability to play rhythm guitar. And while neither pursued a paid-by-the-note style, holding a guitar while either of them played would be an intimidating position for most anyone.

But on the In Session performance viewers and listeners get to hear Vaughan and King play as expert sidemen. Both are careful not to step on the other’s musical lines, but too do they make sure to get tasty licks in when appropriate. The problem with many “guitar summits” is that one or both of the players too often errs on the side of excess or caution. Excess: you play all over the other guy, and the result is a cutting-contest racket that might display technical excellence, but it also gives a headache. Caution: you hold back to allow the other guy space, and in doing so, fade into the shadows. SRV and King navigate the difficult path of avoiding those extremes, and what’s most amazing is that they make it look easy, natural.

Interestingly, the CD and the DVD don’t follow the same program. Both are edits of a single performance, but songs included on the DVD aren’t on the CD, and vice versa. You need them both, and the package gives you both. Most of the highlights are common to both, but the fifteen-minute “Blues at Sunrise” is only on the CD. Introducing it, King relates the story of playing the tune with a couple friends, one Jimi Hendrix and a woman called Janis Joplin. And having by this point witnessed SRV’s ability, King implores Stevie to play Jimi’s part. And he does.

Less than a decade after this session, both men were gone from this world. Fans of either or both will definitely want to give this essential and historic package a hearing and a look.