Day of the Remains, Part Five

The film America’s Lost Band was produced by Fred Cantor, a lifelong Remains fan. But the project started out as something else. Several years ago, Remains leader Barry Tashian and his wife Holly were at one of their annual New Year’s Eve gigs in Tashian’s hometown of Westport Connecticut. Their friend Fred (a musician himself) approached the couple and said, “I have an idea. What would you think of doing an off-Broadway show about the story of the Remains?” 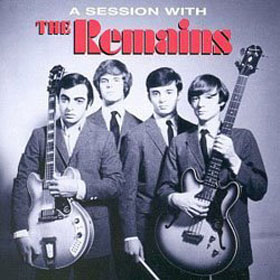 Cantor told them that he had a record of success through sheer perseverance. “And,” Tashian says, Cantor “pulled this thing together. He got it into the New York Fringe Festival. There were five performances in Greenwich Village in a big church basement. It was quite an experience to see. They did interviews with us to get the story, and they actually got young actors to play all of us, the guys in the band, and it was a good evening. And on the last night a friend-of-a-friend-of-a-friend (who happened to be a director in Hollywood for CBS-TV) came out to see the play. He loved it, and he said ‘let’s do a film about it!’”

In the end, rather than produce a film-about-the-play, it was decided to do a documentary. The Remains traveled to Hollywood and filmed extensively for two days solid. Locations included Dodgers Stadium, a radio station, a club, and Amoeba Records. At Amoeba, Tashian beams, “we played a set. And then they put us in an old ’60s Cadillac convertible, and he had us going up and down Sunset Boulevard, following us in the convertible and interviewing us in the car.”

The Remains played a gig on Sunset Strip the second night, by which time Tashian says they were all “pooped out, but we did the best we could.” Of course all of this was filmed, and the modern-day footage made up the second half of the 65-minute film. The first half was comprised of vintage clips of the Remains on the Ed Sullivan show, plus material provided by the band —  photographs, posters, and other memorabilia — to help tell the story of what happened in the 50s and 60s in Boston, all the way through to the Beatles tour. Tashian is pleased with the result, and says that director/editor Michael Stitch “did a great job with it. I just still can’t believe that there’s a film about the Remains!”

“The film was in the Nashville Film Festival,” Tashian recalls. “And so it played at a big theatre close to where I live. All of the guys came to Nashville and stayed with me for six days. We rehearsed and jammed, and then we’d go over to the theater for the screenings and do a question-and-answer session after. On the festival’s closing night they had a big party at The Cannery, a ballroom in Nashville, and we got to play a 45 minute set there. And for whatever reason it was the best set I can remember since I was 19 years old! I swear to God. The sound — everything — was perfect. I was plugged into a ’65 Fender Deluxe Reverb amp. Stock.”

All of the reminiscing for the film had gotten Tashian to thinking. He muses what would have happened “if we had stayed together and had some monster hit back in the 60s. With things the way they were going, the drug scene and alcohol and all, there’s a good chance that some of us could be dead by now. Either that, or we’d be in court suing each other over something.” Instead he says that “we’ve all had great lives. And we are able to get together and play together. We love each other to pieces! It’s great to be able to get the same guys together 45 years later and rock. It’s a happy story.” 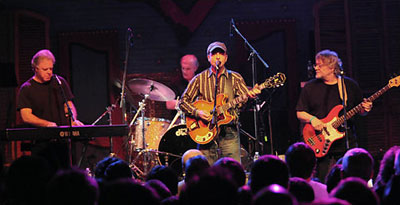 Forty-five years after the debut album, there’s more Remains news. “Epic/Legacy released a compilation re-issue CD, titled The Remains. And Sundazed Records released a wonderful double vinyl album also titled The Remains. The great thing about this album is that it’s pressed in heavy vinyl and is a total mono mix…just like our single records in the Sixties!”

Since the 1970s Tashian has written, recorded and performed with his wife Holly; the duo’s sound is an upbeat acoustic country-flavored concoction. Live dates across the USA and worldwide – including songwriting workshops – keep the couple busy. But Tashian and his old band mates make time for a handful of Remains dates each year; he says that while “it’s good for us to play just once in awhile at this age, we’re not ready to just go on the road” and tour like back in the 60s.

Way back at the tail end of that decade, Lillian Roxon put together one of the earliest serious, critical overviews of the rock scene, Lillian Roxon’s Rock Encyclopedia. Her keen and prescient sense of what would be lasting value is remarkable, even four decades later. Her entry for the Remains reads:

“As Barry and the Remains, this tight-knit group of four Boston University dropouts reigned supreme in New England for over two years from 1965 to 1967. Internal strife as well as difficulty expressing themselves in the recording studio eventually led the group to disband. Barry Tashian, the lead guitarist in the Remains is still regarded in some circles as one of the foremost rock musicians of this decade.”

Tashian laughs self-effacingly when the passage is read to him, but it’s clear he’s proud of the work he did – and does once again — with the Remains.