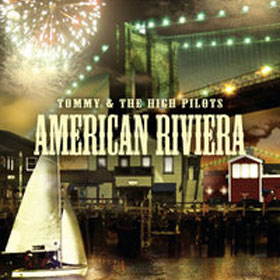 If Neil Finn (Crowded House) were an American instead of a Kiwi, he might sound a bit like Tommy & the High Pilots. On the opener and title cut of T&THP’s EP American Riviera, they rock out with a catchy riff, and apply a yearning vocal atop it all. An unadorned production style has more in common with, say, John Mellencamp than Crowded House, but the song does have that certain something that Finn can be counted on for. It’s over too soon.

“Motorbike” features Tom Cantillon‘s clear and expressive voice, overdubbed on the chorus, in a medium tempo. But behind him, the band pummels along at high velocity, for a pleasing juxtaposition. Subtle pounding piano (if you can imagine such a thing) adds a nice bit of texture. And a slightly unhinged guitar solo notches the excitement up even further.

“Taxi” has a heart-rending vibe even if one ignores the lyrics. It has a wide-screen, epic feel without being pretentious or overwrought. In fact it sounds like soundtrack for a climactic scene in some movie.

“Where to Start” strips things down to their most elemental. Cantillon presents the song’s opening with only voice and guitar. But then the song explodes with a headed-out-on-that-open road feel. Like all the songs on American Riviera, it has a familiar feel; it sounds like you’ve heard it before, but it’s not a rewrite of somebody else’s song.

“The Limit” rocks out in an anthemic, full-on fashion. But “Carried by You” takes a radically different approach. Foot stomps and banjos are on the menu here. In light of the sound of the previous five songs — varied yet rocking — it’s a perhaps unexpected departure. But it works, though it’s over quite suddenly.

Anyone who enjoys the straight-ahead rock sounds that skirt on the edge of Americana — artists like Mellencamp, Gin Blossoms, Old 97s — will find plenty to like on American Riviera. Well, okay: not plenty, since it’s only six songs. But hopefully it’s a teaser for more to come. According to the band’s site, Cantillon brought sixty(!) songs in for consideration, and picked six. Stay tuned; I certainly will.