Album Review: Lucky Peterson – You Can Always Turn Around 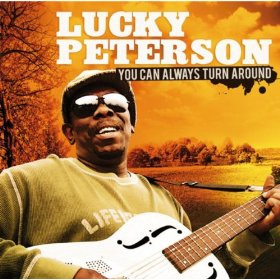 Lucky Peterson‘s had a hard time of it these last many years. Struggles with drug addiction and related health problems plus spotty distribution of his occasional albums have meant that music consumers haven’t been properly treated to his brand of music.

Thankfully for him and us, those issues seem to be put in the past where they belong. Peterson’s newest — You Can Always Turn Around — shows him in top form. A master of the duolian resonator guitar (the steel-bodied acoustic with which he’s pictured on the album cover, Peterson deftly wields his axe across eleven tracks that are a mix of covers and originals.

Everybody’s recorded Robert Johnson‘s “I Believe I’ll Dust My Broom,” but somehow Peterson breathes life in to the blues chestnut. His guitar playing is electrifying, if not actually electric. While many exponents of the instrument lean toward an unschooled approach, Peterson’s licks are sonically perfect, yet not the least lacking in feeling.

On “I’m New Here” the arrangement is more in a singer/songwriter vein. Petrson introduces the song with narration rather than singing. But as he engages in his own call-and-response, his singing is gentle and expressive. The lyrics of this (possibly autobiographical) song provide the album with its title.

Blind Willie McTell‘s “Statesboro Blues” is another well-worn number; here Peterson lets loose on the resonator, making effective use of the spaces between the notes. No exercise in nostalgia, he sings and plays like he means it. The rhythm section’s spare, sympathetic backing keeps the spotlight on Peterson.

Ray LaMontagne‘s “Trouble” gets the Peterson treatment, but rather than being presented in a guitar-centric arrangement, the song is delivered with a gospel feel. Like all the tracks on You Can Always Turn Around, the lineup features ace sessioners from the Woodstock NY area, but that’s Peterson himself ably handling the ivories.

Lucinda Williams‘ “Trampled Rose” continues the string of well-chosen covers. Peterson renders the song in an arrangement that at first calls to mind the late Mali guitarist Ali Farka Touré; the song’s Mississippi Delta aesthetic develops as the song unfolds. An intriguing mandolin melody serves as the bed for the song.

The arrangement of “Atonement” — featuring heavily distorted blues-metal guitar — comes as quite a surprise; on “Why Are People Like That” Peterson sounds more like Joe Satriani than Robert Johnson. The apocalyptic lyrics and swaggering vocal delivery make this a standout track that serves to point out the breadth of Peterson’s talent. And the fiery, nice-n-lengthy guitar solo is not to be missed.

The country blues “Why Are People Like That” shows that Peterson is possessed of wry sense of humor. Here Peterson focuses on his (at times unhinged( vocal, leaving the resonator duties to Larry Campbell.

Peterson’s original “Four Little Boys” is an autobiographical loping story-song. The song illustrates Peterson’s ability to deliver his vocals using a wide variety of styles, each ideally suited to the demands of the songs.

Rev. Gary Davis‘ “Death Don’t Have No Mercy” put Peterson’s resonator back out in front. The unadorned song captures the front-porch vibe, and the singing strikes a perfect balance between controlled and deeply emotive.

The civil rights anthem “I Wish I Knew How it Feel to Be Free” is presented in a pop-gospel arrangement. Irresistibly catchy, the song exudes a timeless feel. Lucky’s wife Tamara Peterson adds a second vocal that gives just the right touch to a moving song.

Curtis Mayfield‘s “Think” closes the disc. Peterson’s guitar engages in tasty musical dialogue with Larry Campbell’s pedal steel on this wordless rendering. Halfway through the arrangement shifts to a more bluesy BB King-styled section, then back to a loping, countrified arrangement.

It’s a fine line to walk, crafting an album that’s at once musically consistent and showcasing a dizzying mastery of a wide range of styles. But Lucky Peterson’s You Can Always Turn Around is just such an album.