Some people get really, really worked up over Elvis Presley. Their slavish devotion fuels a marketing juggernaut that has yet to abate. It’s not just about the music; in fact one could argue that it’s hardly at all about the music. I’m sure Colonel Tom Parker‘s ghost is fuming somewhere that he can’t get his piece of the action.

At the other end of the spectrum are those who think he’s overrated, could barely play a guitar, hardly ever wrote (I mean, actually wrote) his own songs, and was a terrible actor. Further, they point out that other people were doing what he did earlier and better, and that most of what he did was make rock’n’roll commercially viable. And they might agree with John Lennon‘s assessment that — musically at least, Elvis died when he went in the army.

Me, I’m somewhere in the middle. There’s no denying the vitality of those early sides; the first three LPs are filled with exciting music. Well, okay, not filled; there’s some real soppy dreck on there, pointing the way towards, well, most of the rest of Elvis’ career. But to deny his importance to music — and to popular culture in general — is foolhardy and ignorant. 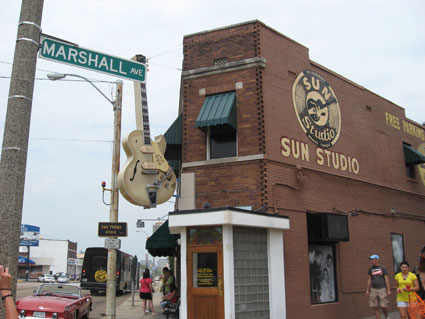 All that said, when I made my recent first-time visit to Memphis, I did not include Graceland on my itinerary. I’ve been to (but not inside) John Lennon’s boyhood home “Mendips” on Menlove Ave. in Liverpool, and to Paul McCartney‘s family home (this was 1990, long before it was declared a landmark by the National Trust). And I’ve stood outside the Dakota in Manhattan. But Graceland? Nah, no real interest for me there.

Sun Records? That’s a completely different story. The most casual of music fans might associate Sun — if they think of it at all — with Elvis, but everyone else knows there was a lot more happening there. Sam Phillips‘ Memphis Recording Service exerted an incalculable influence on the course of history. The list of acts who recorded at 706 Union Avenue in Memphis is a who’s-who of music. Besides the most oft-named artists (Elvis, Johnny Cash, Carl Perkins, Roy Orbison, Jerry Lee Lewis) a number of other great and influential musicians cut tracks there. Ike Turner, Charlie Rich and Rufus Thomas are just three of those names. 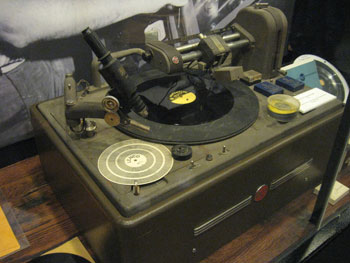 I had no idea, really, what I was in for when I went to the studio on a recent Friday morning. The tiny corner-lot building is fairly unassuming…well, save for the outsized guitar-shaped sign hanging out front, and the big SUN lettering on the building, but you know what I mean. When one enters the front door, the scene isn’t that of a studio at all. There are a few 50s-styled diner booths, a room-length merchandise counter, and a gift shop full of Sun logo-emblazoned items (I bought the bright yellow coffee mug). One buys a ticket and waits for the next tour, which commences at the back of the room.

Thanks to the small size of the place, the size of each tour group is strictly limited; ours was about twenty or so people. We followed our delightfully animated and muttonchopped guide up a set of narrow stairs, past gold record-adorned walls, and entered a smallish museum-like room. Every bit of wall space was covered with fascinating historical items: Sam Phillips’ early field-recording equipment, guitars, etc. Our guide knew his stuff, and gave us a several-minute talk that hit enough high points for those who (inexplicably) don’t eat, drink and sleep rock’n’roll. But for the rest of us, he cleverly peppered his talk with bits of trivia and betcha-didn’t-know-that details. The crowd ate it up. 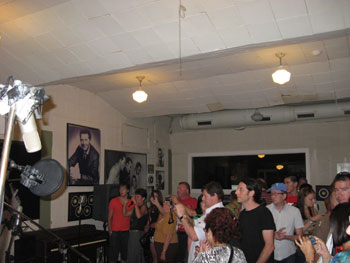 Up to this point, the tour was entertaining and informative. But that first segment would pale in comparison to part two of the tour. We descended a second set of stairs, walked through a small, nondescript office (more on that forthwith) and entered The Studio.

I am not an overly sentimental sort. But a reverent hush fell over me the moment I entered this hallowed space. I was in the room where some of the most important events in music history had taken place. This odd reverence seemed to fall upon the other tourists as well, because the room was nearly silent, as if in a church. Now, I thought, I know how my parents felt when they visited the Vatican. Music is my religion, so to speak, so that’s somehow fitting. 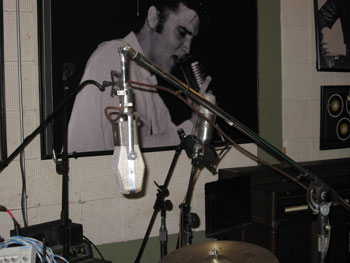 The room itself isn’t terribly large; it’s perhaps 25’x25′ and remains — to this day — filled with musical instruments. Our guide stressed to us that we must not touch these, as they are actual working instruments; in 2010 Sun is a working studio. In fact, during our visit, the adjacent control room (off-limits to tourists) was occupied by some technicians busying themselves with some or other project.

We were permitted to pose for photos in the room, standing by a vocal mic similar to the one Elvis sometimes used (“Elvis might have used this very microphone!” our guide playfully intoned).

And that was it. But what an “it” it was. At the conclusion of the tour we were given a few moments to mill around, and we took advantage of that time to step back into the front office. In the 1950s, that room served as the office of Marion Keisker, a woman often (erroneously) described as Sam Phillips’ secretary. In reality, as our guide stressed, Ms. Keisker was essentially Phillips’ business and creative partner. After that fateful day in which a teenage Elvis Aron Presley came in to make a one-off solo recording of a (relatively insipid) Connie Francis tune as a gift for his mom, it was Keisker who saw talent in the young truck driver. 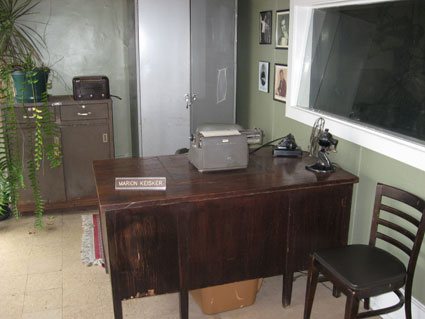 Phillips wasn’t interested, but Marion Keisker persisted. It’s no overstatement to say that had she not divined the raw talent — not readily evident in the recording itself, it must be said — the history of popular music might have been very, very different.

I hadn’t expected such a moving and thrilling experience when planning to visit Sun Studios. But I’m delighted that I made the trip. I left thinking that the remainder of the visit could hold nothing that would compare with Sun.

But that was before I drove down McLemore Avenue…