There’s a thin line between over-the-top 80s/90s hair metal, progressive rock and arena rock. All three have their gruesome qualities, and all often engender narrow, niche appeal. But they all also have something to recommend them. When it comes to hair metal, this reviewer is generally left cold. Despite the oft-touted qualities of acts like Judas Priest, I just don’t hear it: to me it’s too cartoonish and lacking in subtlety. And the overblown wailing of cliché-ridden “anthems” like Europe’s “The Final Countdown” generally elicit little more than an eye-roll, a chuckle and a flick of the radio knob. 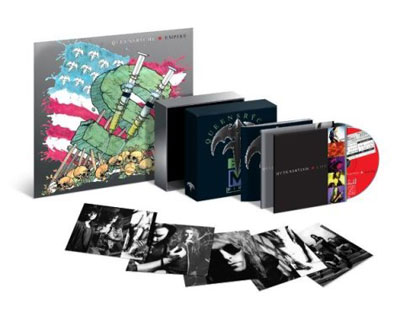 Prog, of course, is a perennial favorite of mine. Many of the usual suspects, old and new — Yes, King Crimson, Genesis, Gentle Giant, Porcupine Tree — are all enduring pleasures. And a lot of the modern, melodic stuff coming out of Europe (the continent, not the band) is pretty great. The 21st century variant of arena rock, in general, is too ordinary and uninspired for my tastes.What’s more, where the three strains meet — let’s call it progressive arena metal — I’ve sort of missed the boat. At the time of its ascendancy I guess I was into other things. One album that passed me by completely was Queensrÿche‘s Empire. Though it was released in 1990 and did quite well, I never heard a note of it. The band’s fifth full-length release, it amassed triple-platinum status worldwide and spawned a #1 single in “Silent Lucidity.”

So as a result I’m hearing Empire for the first time in 2010, in a remastered and expanded 20th anniversary package. For better or worse, I’m listening to it removed from the context of the times in which it was originally released.

On first blush Queensrÿche sounds like a more aggressive version of Journey. Maybe it’s the state-of-1990 keyboard sounds (not bad at all; don’t get me wrong) or the emphasis on balancing crunch and melody, but the harmony-and-hook laden approach of a song like “Jet City Woman” has a lot less to do with Iron Maiden and their ilk than I might have suspected. (And to me, that’s good: I recently passed on an opportunity to review Maiden’s newest. Short version: One spin…meh.)

But back to Queensrÿche. Though they’re classified as prog-metal, their instrumental approach is filled with subtlety, and there’s none of the stupid and tiresome “cookie monster” vocals that pervade much of the harder-edged music of the day.

It’s not difficult to imagine fans of Pink Floyd digging some of Empire‘s longer instrumental sections, such as the midtempo “Della Brown.” The ambient sound effects that bookend a number of the tracks add texture. “Another Rainy Night” sports the dual-lead guitar approach popularized by Boston and Thin Lizzy, and shows Queensrÿche to be a melodically straightforward act.

On Empire‘s title track, lead vocalist Geoff Tate does take a swaggering, slightly over-the-top approach while the band purveys a style not unlike Aerosmith. “Resistance” is a fist-pumping anthem featuring some tasty phase-shifted guitar soloing.

The hit single “Silent Lucidity” is more than a little derivative of “Goodbye Blue Skies” from Pink Floyd’s The Wall, right down to the selection of Michael Kamen to handle orchestration. That said, it’s a lovely song, and illustrative of the sonic and stylistic variety to which the band is committed. The band uses the same slightly derivative (but still compelling) approach on the album closer “Anybody Listening?” It displays shades of The Wall‘s “Is There Anybody Out There?” including fretless bass licks.

The album was reissued in 2003 with three bonus tracks including a cover of dubious merit, Simon and Garfunkel‘s “Scarborough Fair.” The arrangement (perhaps unknowingly) owes a stylistic debt to a version by legendary underground Atlanta band The Coolies. Those three tracks appear again on this reissue, but the package is appended with an extra disc documenting a previously-unreleased London concert from 1990. Seven of the set’s ten tracks are Empire cuts.

For the 2010 reissue the whole affair is lavishly packed in a box that includes a poster and assorted collectible ephemera.

Empire didn’t change my life, and — unlike my experience of hearing Porcupine Tree’s Fear of a Blank Planet — it hasn’t moved me to run out and scoop up the band’s entire back catalogue, but it’s a worthy example of music in a particular style.