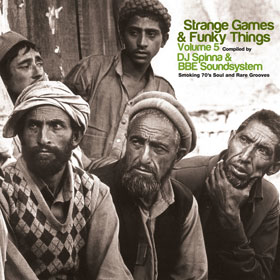 Sometimes it’s a bit of an adventure to wander into a compilation disc without having a clear idea of its thematic angle. I was familiar with earlier comps on the UK-based BBE label – including ones curated by Keb Darge – so I started out from a position of assuming the contents of this disc would at least be worth a spin, possibly much more.

Since it’s titled Strange Games & Funky Things, Volume 5, I was intrigued. The subtitle read “Smoking 70’s Soul and Rare Grooves,” so I was even more interested. Into the player it went.

The first cut was indeed an early 70s pop-soul number by one Ned Doheny, an American singer-songwriter of the “big in Japan” category. No, really. Good song, with more than a few hints of Alan Parsons Project’s “Breakdown” from I Robot (even though APP’s song came out four years after this track). So far, so good, I thought: this is a pretty well obscure song that does indeed have a groove, and it could have been a hit.

But three minutes in, something very odd happened. I started hearing a looped bass and drum figure, and some turntable scratching. “Sonic dissonance” doesn’t begin to describe what I felt. Grandmaster Flash and his contemporaries weren’t working in 1972; what was going on here?

By the time I formulated those thoughts, the disc had slipped into a romantic soul-funk number called “Sweet Stuff” by Sugarhill Records founder Sylvia. And then it hit me. I picked up the CD sleeve to read the name of the compiler/curators of this set. Yup, though I didn’t recognize the names, they were self-explanatory: DJ Spinna & BBE Soundsystem. Yes, this set is a compilation where the tracks are linked in the manner of a live DJ. Fascinating.

I don’t dance. Maybe I’m just too white and uptight, with neuroses outta sight. So the idea of a set that – in the words of this CD’s press kit – contains “dance floor fillers” doesn’t really move me (so to speak). My enjoyment of music has more to do with its sound than its feel. But this stuff sounds and feels good.

The tracks are generally of that early 70s just-before-disco-hit vintage, but there’s something especially inventive and exploratory about them. On a number like Richard Evans’ “Capricorn Rising,” you’ll hear an arrangement that is grasping for a new genre. There are hints of South American samba, scat vocal jazz, and more. And all these elements are laid atop a beat that moves, with sweeping string arrangements.

Deep cuts, yes. Other than two acts —War and Merry Clayton – all of the artists on this 21-track compilation were unknown to me. A set like Strange Games yet again beats the listener over the head (in a good way) with the inescapable fact that lots of worthwhile music has slipped by without notice. The curators of this and other sets are in their own way funk-soul Alan Lomaxes.

The disc is sequenced so that changes in tempo and feel are minimized; if you don’t listen closely, the cuts will tumble into one another without calling your attention to the changes. The seamless editing works quite well. In a live setting, DJs get one shot to make the transition: sometimes it works, sometimes less so. Here on disc, DJ Spinna has taken the time and care to get it oh-so-right.

There’s a world music bent to this collection. Japanese and South American artists are included. But even these are smoothly included into the mix. You’ll hear congas, vibes, horn sections…you name it, and you’ll like it.

With its jazzy flute and chunky-funky guitars, The Soul Searchers’ “Ashley’s Roachclip” sounds like the theme to a forgotten blaxploitation film. And DJ Spinna’s editing the song straight into Willie Hale’s “Groove On” is nearly seamless. And in one of the rare cases where the transition does show a seam, Spinna makes the best of it, inserting a treated vocal announcing his presence in the mix.

The disc will be packaged with “bonus” disc containing most of the tracks again, but in an unmixed format. I ask, why bother? If it’s always done this well, why not jus enjoy the mixing talents as applied to a good collection of songs? I’m hooked.