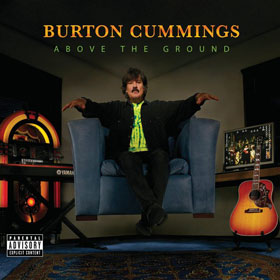 Sometimes, life disappoints. You go into a new experience hoping it will meet your expectations, and it falls short. You did your best to not, as the Brogues sang, “build your dreams too high.” But despite your best efforts to approach the experience with few preconceived notions, it just plain didn’t “happen” for you.

And then you sat down to write about it.

Burton Cummings has a long and illustrious career, both with the Guess Who and as a solo artist. The Guess Who earned and enjoyed a long string of hits; many of those songs remain classic rock radio staples to this day. And Cummings wrote or co-wrote most of those songs. His talents as a composer, performer and musician are beyond question, and his remains one of the most recognizable voices in rock music: if you hear a less well-known Guess Who cut (like the 1974 single “Star Baby,” one of the first 45s this writer ever purchased), you’ll know the singer is a familiar voice.

The Guess Who threw in the towel in the mid 1970s, Cummings’ songwriting partner Randy Bachman long having since left for Brave Belt and then BTO. Cummings enjoyed solo success , especially with 1976’s “Stand Tall,” a makeout song for the ages (or so my cooler friends insisted in those days).

Cummings’ released output slowed drastically after 1981, however. Since then he’s released only three albums, one of them a live set. You know that old rock inside-joke: “But they’re big in Japan.” Well, Burton Cummings remains something of an institution in his native Canada, where’s he’s popular on his own and as part of several Guess Who reunion tours. (Side note: former late-era Guess Who member Kurt Winter Jim Kale owns that band name, so neither Cummings nor Bachman are permitted to tour using it. The music business is weiiird, man.)

Anyway, Above the Ground is Cummings’ first collection of new studio material in nearly twenty years. (Oddly, though the album is being promoted as a new release, it came out in 2008, where it charted respectably in…Canada. And I’m sad to say that while Cummings’ voice remains in fine form, the songwriting and arrangement is pedestrian.

Part of the problem seems to lie with the fact that Cummings has a lot to say. Perhaps it’s since he hasn’t recorded much in recent years, but these nineteen(!) songs all seem to go on and on lyrically. Even if they feature repeated lyrical lines, they seem to go on too long. How about a guitar solo, Burt?

“Crazy if You Mess With the Gods” opens the album with a faux-rock feel, and things never really pick up from there. From the lyrics, you’d quickly glean the second track is called “Junior Won’t Behave,” but there’s little in the way of rock and roll naughtiness in the playing. The album is possessed of a too-by-the-numbers feel. The antithesis of a raw rock and roll record like, say Nick Curran’s Reform School Girl, Cummings’ album sounds unmistakably as if it were put together using ProTools. Every note is in place, but it’s all lifeless and – I must day – uninteresting.

Cummings’ attempts at humor are hit-or-miss. “T.P.O.S.” is a country-flavored romp, and you get three guesses what the abbreviation stands for. But the song doesn’t swing; it feels stiff  and phoned-in. “Any Minor Miracle” sounds like a exceedingly well rehearsed bar band (Holiday Inn division) rewriting a Bob Seger song from the lackluster Against the Wind era. Now, if you actually like Seger’s style of non-rock balladry and want to hear a smoother singer do it, then Cummings is your man. Others will want to hit the skip button.

Which would bring you to “Powers at Play,” which sounds musically like an outtake from Kenney Jones-era Who. And if you are getting the impression that I’m referencing works from other acts well past their sell-by date, then you’re getting my drift. “Powers at Play” feels overwritten lyrically, underdeveloped musically.

And on it goes. “Ponderlust” threatens to bring back some of Cummings’ distinctive, soulful electric piano playing. But the song itself offers nothing distinctive. And you’ll be forgiven if you ask yourself, “Wait: haven’t I heard this song on the album already?” What’s really scary is that you’re only on Track 6 out of nineteen.

“Rollaway” is a throwaway as Cummings delivers it. It’s a piano-led gospel vocal number that’s Attempt Number Two at humor on Above the Ground.

Cummings gained considerable notoriety for his song “American Woman.” So in the 21st century he takes aim southward with “We Just Came From the U.S.A.” If you like your anthemic rock insipid and lunkheaded a la Billy Squier and Bon Jovi, then you might get a kick out of this. The band-in-a-box feel doesn’t help.

Worse still, though, throughout the album Cummings seems to be grasping for style upon which to hang his musical hat. Rather than sounding varied and textured, the result is confusion. On “Pretty Pictures” he makes soft-rock a la Paul Simon. On “Look Out Charlie (There’s a new Bartender in Town)” he’s trying on Billy Joel’s late 1970s style. True, he’s quite successful at capturing the feel, but if that’s what you’re up for, why not just spin Turnstiles?

The liner notes indicate that the next track is called “Kurt’s Song.” That’s tantalizing: maybe it’s a number where Cummings addresses a former Guess Who bandmate. Nope: it’s an uptempo ballad of no particular merit. Not at all a bad tune, “Kurt’s Song” actually rates as one of the album’s more effective stylistic exercises. But if you’re wondering who Cummings is aping on this one, it’s Jackson Browne.

“Richard” displays Cummings’ worst aspects. The music is forced melodrama, and the lyrics do match the music. But here Cummings’ vocals are overly mannered and devoid of passion. He hits the notes and displays that his vocal chops are still very much intact, but the emotion doesn’t come off as real.

There are seven more tracks on Above the Ground. None of them ranks among Burton Cummings’ best work. “Dream” is nice enough, and for once does have a genuine vibe to it. “Up in the Canyon” tries — and fails – to get funky. “Revelation” tries on another style: the soft-samba kind of thing that Todd Rundgren did on With a Twist… But Todd had stronger material to work with. “Revelation” is an attempt at a rewrite of Abbey Road’s “Mean Mr. Mustard.” Accept no substitutes. “Invisible” cops a melody from another song of old (you figure it out if you care).  “Retribution” is the album’s longest track at five and a half minutes. It’s an okay song that aims for the big guitar aesthetic, but again it sounds canned, lifeless.

Above the Ground concludes with the title track, and musically it stands head and shoulders above the preceding eighteen numbers. Cummings doesn’t seem in a hurry here, and while he’s got a lot to sing, his unforced manner and clear piano figure work well to create a memorable song. Two or three more tunes of this caliber, and a bit of pruning, and we’d have a good-to-very-good album in Above the Ground. As such, we don’t. Hope springs eternal that Cummings will adopt a more “live” approach on his next studio outing, play it less safe, and maybe rock out just a little bit more convincingly.