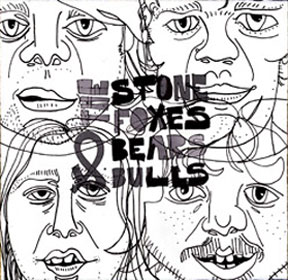 Among those who view the mid 1960s as something of a Golden Age for rock music, consideration of the period 1976-1989 is sometimes greeted with a grimace and a shrug. But quite a lot of interesting music was produced during that time, and once you dig past the commercial stuff, you’ll get grudging agreement from those guys. And by “those guys” of course I mean “me.”

The Stone Foxes have clearly listened to a lot of music from that era. Their album Bears & Bulls is impressively eclectic; the stylistic breadth makes the disc come off almost like a mixtape. The opener “Stomp” is probably the most “modern” track on the album, and it’s probably the weakest. To be honest, I was busy doing something else when I gave the disc its first spin. As such, I wasn’t able to hit the skip button, but I did find myself thinking, “not bad, but not my thing.” The acoustic slide wedded to a, well, stomping, clapping beat made me think of a front porch version of the Black Crowes. To which I’d reply, “nice, but no thanks.”

But damn enough if things don’t quickly kick into high gear with “Patience” (an ironic title, since it rewards the listener’s possession of a bit that very quality). Swaggering, riffy rock that will appeal to fans of mid 70s rockers like Aerosmith, “Patience” even has a bass guitar solo. And it works! So at this point in the disc, the attentive first-time listener is thinking that The Stone Foxes are a slightly less-stylistically hidebound American version of Wolfmother. Right?

Wrong. On “I Killed Robert Johnson” the band strikes a pose (though I hesitate to call it a pose, since the seem to come by their approach honestly) a bit like Neil Young and Crazy Horse, with elements of Lynyrd Skynyrd thrown in for good (but not overbearingly southern-fried) measure. Lyrically it’s a knife-wielding roadhouse blues, and musically the song goes places. Unlike some songs, to hear the whole song, you have to listen to the whole song. You know what I mean. What’s more, they’ve got a wah-wah pedal and they’re gonna use it. There’s an irresistible shout-along vibe to the track.

Next the band heads in a country-rock direction that’s a bit reminiscent of Bon Jovi (except that it doesn’t at all suck). A pedal steel pretty well solos throughout the whole of the track (“Passenger Train”), which is yet another number that will find the listener singing along with the chorus. And again the arrangement is textured enough that the song reveals its pleasures as it unfolds.

And so it goes. “Young Man” is a heavy riff rocker that will appeal to fist-pumping fans of bands from Mountain to Black Mountain, from Black Sabbath to the Black Keys. “Easy” slows it down for a country honk not all that far removed from what the Rolling Stones did a bit of in the early 70s. And the Stone Foxes have a knack for memorable lyric lines that are repeated enough to stick, but not enough to be overdone.

“Reno” rocks out as a modern (and more intimate) take on the Allman Brothers‘ “Whippin’ Post.” It’s more than a mere rewrite of that classic song, but the vibe is unmissable. And yet again (again) the arrangement makes a left-run mid-song to keep the listener’s attention. These guys earn that attention, and not once on Bears & Bulls do they take it for granted, not even for a second. The songs are economical, full of ideas, but with all the fat trimmed off. “Through the Fire” shows the band can write a rock ballad that’s neither wimpy nor overwrought. Like all of the songs on Bears & Bulls, it conjures the feel of the sort of music that used to blast out of speakers in a t-top Camaro, yet the band never sounds like they’re aping the rockers of old (though they come close on “Reno”).

Ever wonder what “Little Red Rooster” would sound like if Johnny Winter recorded it? Your answer is on this disc, and while the playing isn’t quite up to Winter’s standard (an unreasonable expectation) the feel is there. Far from being a tired, phoned-in blues cover designed to pad out a short clutch of originals, the track finds the band living in the grooves, singing and playing it like they mean it.

Vocal cord shredding is on order on “Hyde & Pine.” A catchy, repetitive riff and Stonesy rhythm make the song chug along. On “Mr. Hangman” the band reaches waaaaay back for their aesthetic. Blues harp overdriven through a Green Bullet? Check. Vocals processed the same way? Check. Stomping, jackbooted rhythm? Certainly. And the disc wraps up with a song that nails that here-comes-the-end-of-the LP vibe. They throw in a little bit of every element that has come before on the disc. It’s a subdued number but it wraps up the record and effectively restates the musical and lyrical themes.

If you’re one of those people who think there’s not enough music that captures the rocking, swaggering yet comparatively carefree feel of the late 70s, but you don’t want to shell out bucks for a phonograph player*, you’d do well to score a copy of The Stone Foxes’ Bears & Bulls. Over twelve tracks the band manages to look backwards and forwards all at once.

*As it turns out, Bears & Bulls will be available on vinyl as well.