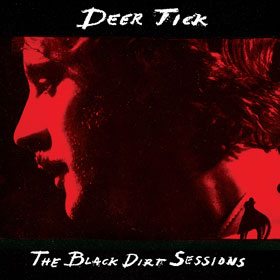 The Black Dirt Sessions virtually defines the terms moody and atmospheric. With hints of everything from Americana (of the [Canadian] Band variety, as it so happens) to a dialed-back Roky Erickson (13th Floor Elevators) to gospel hymns, Deer Tick has created something spookily inviting.

There’s a strong melodic sensibility to all of the album’s eleven tracks. The arrangements are straightforward yet complex: at first the songs seem to have only a few things going on musically, but the layers reveal themselves to display great depth. “Choir of Angels” (appropriately enough, one of the more gospel-feeling tunes) is built atop of wheezing organ. “Twenty Miles” is held together by a thumping, jaunty bass line, but its bridge is dreamy and elegiac.

These are wordy songs, no doubt. The handwritten lyric sheet included with the album will cause listeners of a certain age to whip out the drug store readers, but doing so will reap rewards; the songs move far beyond moon-june territory while maintaining a bit of a classic approach (i.e. rhyme scheme).

Vocalist John McCauley wrote all of the songs, and delivers them in his idiosyncratic and inimitable voice. Sometimes he sounds like a Tom Waits with a more mainstream pop sensibility. But on “Goodbye, Dear Friend” there are hints of — wait for it — Jackson Browne. Well maybe the Pretender after smoking some unfiltered cigs and gargling with whisky. That track’s solo piano accompaniment imbues the song with a melancholy, end-of-album feel, even though it’s only the third track.

The Black Dirt Sessions is filled with more texture and variation than one might expect. If the album has an antecedent, it might be something like Plastic Ono Band. As on that 1970 John Lennon album, the songs put the vocals out front; the melodies are strong and memorable, but they exist to deliver the lyrics, not the other way ’round. Even a song with a “ba ba ba” pop element, “Piece By Piece and Frame By Frame,” conveys emotions like dread, regret and loneliness in both the words and music.

The stripped-down arrangement of “The Sad Sun” sports only McCauley on voice and acoustic guitar plus Elizabeth Rodgers Isenberg. Though the band lineup credits five members (“with the help of” Rodgers Isenberg), the generally spare presentation up to this point suggests something more akin to a solo excursion with occasional instrumental adornment.

Fully halfway into the album, “Mange” is the first track to be built upon a relatively standard rock foundation. The rhythm section — with a subtle but pleasingly busy drum part wedded to a hypnotic and simple bass line — sets out the feel, while a bit of electric guitar picking fills in the holes. As the song progresses, it expands, eventually revealing a sprightly barrelhouse piano solo that leads onto a full-throttle guitar solo. The band kicks into high gear and starts playing like they’re The Outlaws. This mid-song development is totally unexpected and totally welcome; for a brief moment, Deer Tick rocks out like mad.

But again it’s McCauley’s wizened vocals that are placed front and center. McCauley’s vocal style all but guarantees he’ll never reside in the top 40, but clearly that’s not his goal. His raspy yet clearly heartfelt delivery may wear on some, but his voice fits his songs like a worn glove.

“When She Comes Home” continues in a midtempo southern rock vibe. The song serves up hints of Neil Young and Crazy Horse. Oddly, credits and lyrics for this song don’t appear on the sleeve. “Hand in My Hand” finds the band settling into a stylistic groove; revealing that — Rust Never Sleeps style — the album is front-loaded with the more sparely-arranged tunes. Whatever the reason, the track sequencing is inspired, and rewards those who hang on all the way through.

“I Will Not Be Myself” seems at first to head in one direction musically, but a soaring-yet-spooky chorus takes the song somewhere else. And when it’s repeated, the chorus widens the song’s scope. The track takes time to develop, the aural equivalent of a movie camera in tight closeup on an object — something in the lonely desert, perhaps; you’ll conjure your own imagery — slowly pulling back to reveal the whole wide-angle scene.

“Blood Moon” is music-noir a bit reminiscent of some of Steve Wynn‘s solo work. A distorted organ solo sounds like background music from a Vincent Price film. The album ends — only slightly predictably — with a return to the spare arrangement aesthetic. “Christ Jesus” is built around McCauley’s voice and a piano that has that unmistakable wobbly church-basement quality. Subtle strings add just the right amount of somber tones. Toward the end of the song, McCauley goes for broke and sets about tearing his vocal cords to shreds.

I could easily produce a list of reason why I shouldn’t like The Black Dirt Sessions. The idiosyncratic vocals. The fact that it doesn’t rock all the way through. The lonely vibe. But to hell with all that: to my great surprise, Deer Tick’s third album may well end up on my 2010 best-of list. Recommended.