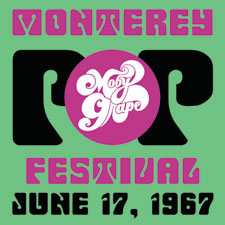 In the summer of 2007 I spoke at length with rock impresario Lou Adler, in connection with the 40th anniversary of the Monterey Pop Festival. During our talk, I brought up a question he had heard many times before: What ever happened to the film of Moby Grape‘s set?

The San Francisco-based Moby Grape was a pop-psych supergroup of the highest order. Their perfect 1967 debut Moby Grape is on a par with The Beatles‘ Sgt. Pepper’s, Love‘s Forever Changes and a select few others. But the three-pronged attack of bad management, naughty behavior and plain old bad luck derailed the band, and they never truly followed up with a similar-quality release.

They did play some shows, and among the highest-profile gigs was their Saturday slot at Monterey. Scheduled as the opening act for the evening session, the group was introduced by Tommy Smothers: “The first group tonight is kind of like in a more difficult position than another group, because everybody’s getting settled; someone has to start the show. And this next group, I think we’re very happy that they decided to [go on first], because nobody else wanted to go first. It’s a difficult position. So let’s have a warm hand–really, let’s make it extra-warm–for Columbia recording artists Moby Grape!”

The quintet took the stage and performed four* songs. They kicked off with a pounding rendition of guitarist Skip Spence’s “Indifference,” highlighting some of the group’s many assets: they all sang, they all wrote, and they had three guitarists who could play lead. The band was in top form, and clearly glad to be at Monterey. “Welcome, majestic crowd! You can’t believe what it’s like up here, seeing all of this,” Bassist Bob Moseley exclaimed, before launching into his brief “Mr. Blues.” They followed that with guitarist Peter Lewis‘ plaintive, mid-tempo “Sitting by the Window.” The final song was the stunning, rocking Skip Spence song, “Omaha,” again showing off complex harmonies, intertwining lead guitar runs, and stop-start drumming.

And that was it. Twelve and a half minutes, and history was made. A couple dozen live bootlegged performances of the Grape do exist, but only a few are from their classic period. This recording is a soundboard, and was either taken from audio reels or…perhaps…from the sound track of DA Pennebaker‘s 16mm movie cameras. So: what about the film? Moby Grape’s set didn’t make it onto the Monterey Pop film, or onto the albums, or even onto the bonus outtake reel included with the recent DVD reissue.

Lou Adler: “I ran into [guitarist] Jerry Miller the other night. I said hello to him, we talked for a minute, then I walked away. Then I walked back, and I told him–because it’s true–in all the interviews that I’ve done [about the Monterey Pop Festival], everyone talks about Moby Grape. And I feel bad about it, because evidently–and I knew it was a really good performance–it’s a standout performance in the minds of a lot of people. I promised him that I’d go back and look for that footage, and see what we could do about it.”

At press time, it hasn’t turned up, but the rumors do persist. Meanwhile we have this excellent, all-too-brief audio document. These guys never could catch a break. The group’s albums were reissued on Sundazed, but in keeping with their star-crossed history, their (“allegedly,” suggests our legal department) evil former manager Matthew Katz seems to have intervened: the release was pulled from shelves in November 2008.

Postscript 2010: The brief Monterey performance is now legitimately available on the 2010 release Historic Live Moby Grape Performances 1966-1969. Go buy that, not the bootleg; these guys have had no end of getting screwed by record companies and management.

*Postscript 2018: Apparently they did more; footage has finally surfaced of what looks like the band’s actual opening number, “Hey Grandma.” View here.

Difficulty to Locate: 5 out of 10 (but buy the legit one instead!)
General Listenability: 10 out of 10