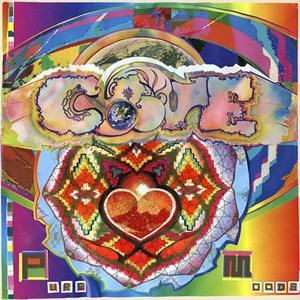 Somebody’s been listening to some old Television LPs. The propulsive yet droning of “Hot Bricks,” the opening salvo on Pure Moods, the latest EP from CAVE (yeah, all caps) can’t help but conjure mental images of New York’s influential art-punk-prog quartet.

Spectral Farfisa-sounding keyboards provide a solo of sorts, but it’s perhaps best to think of they keyboard part as an addition to the instrumental break rather than a solo per se. The band seems to be speeding up as they go along; I don’t have a BPM meter handy to verify this, but they definitely ratchet up the tension. Musically, “Hot Bricks” is little more than a one-chord workout, but it’s enthralling nonetheless. 1960s psych elements are blended well with the ’70s guitar freakout style of, well, Television. And it stops all sudden-like, leaving the listener wishing for more of its drone-y goodness.

“Teenager” is a different thing altogether. A guitar figure is layered with tons of delay, and then a gurgling synth line — one that would be right at home on an Ozric Tentacles release — comes in. Unfortunately, things take a left turn from there, and not an especially pleasing one. The chanted vocals have a bloodless, ennui-filled ambience to them. The vocalists eventually ratchet things up to a yelp, which is an improvement of sorts. Then the song heads back into instro territory, and the all-at-once vibe takes hold in a good way. A nearly cymbal-free drum pattern holds things together while the guitar and synth twiddle atop a super-tight rhythm section. But then those damn vocals come back, and again fail to offer much of interest. Then a lengthy guitar freakout ensues. Verdict: the song would work best as an instrumental.

The three-song EP wraps up with “Brigitte’s Trip”. The song clocks in at over thirteen minutes, making it nearly the length of the preceding two cuts combined. Building from a staccato guitar figure atop a crisp and simple drum pattern, the song unfolds slowly, revealing interesting features as it progresses. The ethereal Star Trek styled keyboards hold down a bed while the guitar slashes and then pulls back to restate the central riff. The song’s ambience is halfway between that of a basement jam and a tightly focused art-rock piece. Not to belabor the Television comparison, but if Tom Verlaine overdubbed some synthesizers, this is what they’d sound like.

Three-plus minutes in the tension continues to build. The highly melodic song swaggers, and then a good minute or so later, vocals come in. But here they’re more of the standard (in a good way) rock vocals. By this point the band’s controlled cacophony resembles the sort of thing one might see and hear midway through a concert by The Church. Then — just as slowly as it built — the song begins to recede, to fade away. Eight minutes in, it’s a minimalist arrangement with synth at its center. At this point the listener may begin to wonder if in fact the song really was improvised rather than composed. Speaking (as we were a few grafs ago) of New York City, the group playfully subtitled the track “White Light/White Jazz,” so they definitely possess a collective sense of humor.

A bit of reading on CAVE turns up the fact that they’re often labeled as Krautrock, and yeah, I can hear that. Worth a listen for anyone with an interest in music that straddles the spacey/earthy continuum. And/or fans of Television.