In connection with the 2010 Collectors’ Choice Music release of the 3CD compilation The Complete Columbia Singles [review here], I arranged a series of extensive, in-depth interviews with former members of 60s hitmakers Paul Revere and the Raiders. I was fortunate to gain insights from vocalist Mark Lindsay; bassist Phil “Fang” Volk; guitarists Jim “Harpo” Valley and Keith Allison; and Raiders manager Roger Hart. In a modest tribute to Raiders guitarist Drake Levin – he passed away on July 4, 2009 – I’d like to present PART FOUR of this five-part Raiders feature. — bk 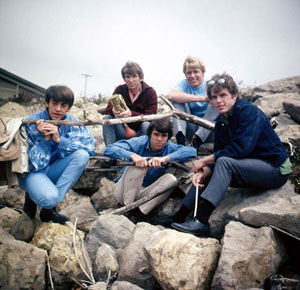 The Happening Era
In 1967, Paul Revere and Mark Lindsay went to Memphis and filmed a pilot for a planned TV show called Treasure of ’67, but that project failed to materialize. A local station (WHBQ) had just installed color cameras, so the pair produced an off-the-cuff program in hopes of selling sponsors on the idea. Lindsay laughs as he recalls the “last-minute” nature of the program, complete with “spray-painted paper plates” decorating the wall and naughty banter that could never make it onto TV. At one point in the program, Lindsay turns to Revere, who’s wearing a frog sock puppet on his hand, and says, “Get the frog out of my face!” 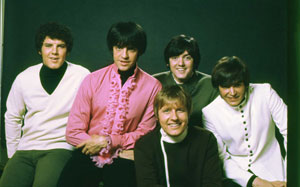 Meanwhile, Roger Hart had suggested to Dick Clark’s people that they should develop a show for Revere and Lindsay, based on, in his words, “whatever’s happening in music.” What came out of those meetings was the weekly program Happening (and later a companion daily show called It’s Happening). Their co-host on some programs was a former co-star from their WTAI days, solo artist Keith Allison. The Raiders and Allison had toured together for years; Allison would open the show, and then return mid-set to be backed by Revere’s band. Allison had also contributed as a session musician to the singles “Ups and Downs” and “Him or Me – What’s It Gonna Be?” In 1968 Revere approached Allison to join the group on bass. “Be in the studio next week,” Allison recalls Revere telling him. He showed up in time to play on the single, “Cinderella Sunshine.” 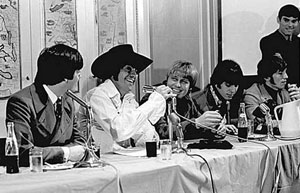 By 1968 the band settled into a lineup of Lindsay and Revere plus southerners Freddy Weller on guitar, Keith Allison on bass, and Joe Correro Jr. on drums. While the 1968 album Goin’ to Memphis was a Raiders album in name only (Lindsay recorded all songs — except the single “Peace of Mind” — in Memphis with producer Chips Moman and his stable of sessioners), the next three — Something Happening (1968), Hard ’N’ Heavy (with Marshmallow) (1969) and Alias Pink Puzz (1969) – were more band-centered projects. “On Hard ’N’ Heavy, it’s all us,” says Allison. “That’s all Freddy, Joe and me. We played everything on it. Glen D. Hardin played keyboards” on a few tracks, he says, but “I played keyboards on a lot of the stuff in Paul’s absence; he was already up in Idaho.” 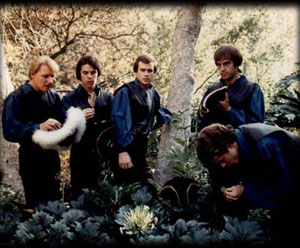 After the Sixties
In the new decade the hits slowed down (“diminishing returns” for their efforts, says Hart). Lindsay and Weller both had successful solo careers in tandem with their Raiders work, and concerts of the era included selections from their solo records in addition to Raiders hits. The latter were often condensed into medleys, since the length of a typical concert didn’t allow for performance of all of the Raiders’ long list of hit singles.

The surprise success of another Raiders-in-name-only cut, “Indian Reservation,” in 1971 reinvigorated the group as a concert draw, but the rocking 1970 Collage LP bore little resemblance to that sound. By the early-to-mid 1970s Paul Revere and the Raiders was more of a live revue than an album-making outfit.

Even though the music got heavier, Raiders concerts didn’t bow toward the musical excesses of the era: Paul Revere and the Raiders never did drum solos. “In February ’72 we went into Vegas,” Allison recalls. “The first two rock acts to play Las Vegas were Elvis and us. We were at the Flamingo, and he was at the Hilton.” 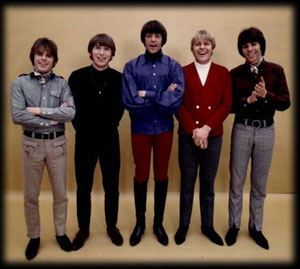 The group had retired the Revolutionary garb shortly after the departure of Phil Volk, Mike Smith and Drake Levin in favor of “high-fashion street clothes,” in Allison’s words. By the early 70s they wore “jumpsuits with a yoke up the front, and rhinestones and shit” like Elvis, Allison laughs. Coming full circle, when the Raiders went to Vegas they again donned the uniforms.

While gigs in Las Vegas and on the oldies circuit suited Revere, the other members slipped away one by one. By 1975 Allison and Lindsay had left, and the recording era of the group was effectively over. Revere continued the group as a live act with various other musicians, and as of 2010 continues to perform with a lineup based in Branson, Missouri. Hart likens the Raiders’ ever-changing lineup to “a well-oiled machine, with occasional spare parts.”

The final segment of this five-part Raiders series will examine unreleased material and the group’s enduring legacy.