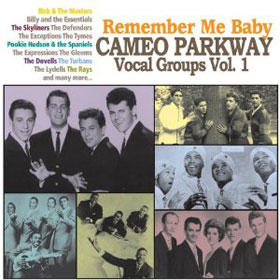 Cameo Parkway was a Philadelphia-based record label with a heyday in the 1950s and 1960s. While the label enjoyed some success in the album era with artists like Chubby Checker and ? and the Mysterians, Cameo Parkway is more often thought of as a singles label. And C-P released a great deal of what can best be termed R&B vocal (“doo-wop” is a too-limiting and ever-so-slightly pejorative term for the genre).

Precious few Cameo Parkway sides have made it into the digital age; label owner Allen Klein resolutely refused to put out any of the music (for reasons never made clear), and as such the C-P material commanded exorbitant prices on the collectors’market.

Thing is, sometimes collectors push up the market value of old records for extramusical reasons. Let’s face it: some things are rare because nobody was interested the first time around. But that is clearly not the case here. With cooperation from ABKCO (the late Klein’s company), Collectors’ Choice is handling the rollout of Cameo Parkway vault material. The promisingly-titled Remember Me Baby: Cameo Parkway Vocal Groups Vol. 1 collects two dozen songs in shockingly high fidelity onto a single disc.

True, a lot of the material included does fall under what many would call doo-wop tag, but stylistically the music covers an admirably wide musical landscape. Vocals (of the tightly-arranged sort) are always the primary focus, but there’s plenty of playing. You’ll even hear the occasional sax solo (“I Don’t Want Your Love” by Rick and the Masters) and groovy combo organ (the Dovells‘ raucous, clap-happy “Short on Bread”).

Only the most dedicated vocal R&B aficionado will recognize most of the artists included on Remember Me Baby, and the same goes (to a slightly lesser extent) for the songs. But the tracks (which span 1958-65) are of fairly high quality. The overall vibe is decidedly upbeat. And these tracks, while semi-obscure, clearly enjoyed influence beyond Philly. The Gleems‘ “Sandra Baby” sounds like a prototype for Frank Zappa‘s Cruising With Ruben and the Jets album.

There’s the occasional bit of subsonic rumble or odd sound leakage, but in general the digital transfers (from the original masters) are nothing short of amazing. Even vinyl purists will be forced to admit the undeniable sonic brilliance of this set. This reviewer hasn’t heard the original vinyls of most of these songs, but it’s a safe bet that you’ll hear things on the new set you could merely imagine on the vinyl. It’s that good.

The liner notes pack a dizzying amount of information into a limited space, and as such they’re a bit difficult to wade through: there’s just too much information to read as such. But listeners should be grateful for the amount of research that went into the project. Best to think of the liner notes more as a reference than an accompanying essay.

Anyone with an interest in R&B and in possession of an open mind is advised to check out Remember Me Baby. For this album’s hearing to be limited to doo-wop aficionados would be a tragedy and a waste. Here’s looking forward to many more volumes in the series.