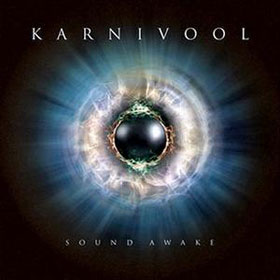 Even though it kicks off with a gentle plinking sound, “Simple Boy” — the opening track on Karnivool‘s Sound Awake — is heavy, heavy, heavy. Older fans, think of Blue Cheer. That kind of heavy. Younger folks, think of Soundgarden. That kind of heavy, too. Subsonic bass lines threaten to loosen your dental work. Plodding — in a good way, mind you — drums summon the ghost of John Bonham. Distorted, buzzing guitars snake around catchy melodies. And vocals in the classic mold — that is, singing not screaming — float above the proceedings.

This isn’t lockstep meat-and-potatoes rock of the Grand Funk variety (not that there’s anything wrong with that). Often the throbbing bass is following its own melody while the guitar and vocal line go elsewhere, but it all works well together.

You may notice I haven’t mentioned any other song titles, and I haven’t spent any time at all discussing Karnivool’s lyrics. For me, those things aren’t at all the point of this disc. It’s about the sound, the feel. And Sound Awake rocks. There is a healthy amount of sonic variance on the disc. The songs sometimes start in a pastoral fashion and build moodily into something bigger, more explosive. And — now I’ll mention a song — “New Day” traffics in musical subtlety. But in fairness to all the songs on the disc, subtlety is truly in evidence (subtly, ha) throughout the album. Even when it’s bone-crushingly loud, there’s plenty going on. Despite the group’s being labeled as prog-metal, I don’t hear that. Their songs are too conventional (in a good way) for prog, and too melodic for metal. There’s a good bit of care and finesse within the songs and arrangements.

If there’s a complaint about the music on Sound Awake, it’s that it’s too damn loud. Now loud is a good thing — no, it’s a prerequisite — for this sort of music. But there’s a point at which it’s just too loud. Factory-installed car stereos aren’t likely to be able to handle the wide spectrum of frequencies on the album. You’ll probably find that you can’t crank this up as loud as you might like. But if you have a proper home system — does anyone have those anymore? — it’ll sound great. On my 100W system it absolutely rocks, but I’m not sure how happy the neighbors are as I review this disc using as many of those watts as I can stand.