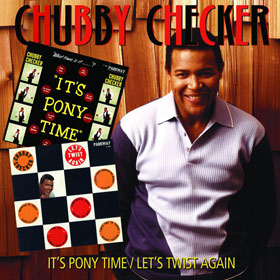 As a music critic, there’s an automatic reaction — sometimes — that must be guarded against. The tendency to be dismissive, to pre-judge. So it was when I received an advance of one of the several new Cameo-Parkway reissues, the Chubby Checker twofer It’s Pony Time / Let’s Twist Again. “Chubby Checker?” I asked out loud to an empty room. “You must be kidding.”

Thank goodness I decided to give the disc a listen. Is it gimmicky? Sure-as-hell it is. It’s Pony Time collects a dozen dance-themed songs, from the title number to “The Watusi,” “The Shimmy,” and “Dance the Mess Around.” But this is genuinely exciting music that succeeds in its mission: getting people to dance, probably mostly in their early sixties living room.

The production is pristine. The playing is whip-smart and incredibly tight. The arrangements are more interesting that you might expect for music designed for dancing (rather than listening). Checker’s vocal delivery owes more than a little to the Roy Brown school, and that’s not at all unwelcome. The band strolls, stomps or swings as is called for on each tune. This pair of early 60s albums — It’s Pony Time dates from March 1961, and Let’s Twist Again was released five months later — have more in common musically with sounds of the 1950s, but let’s remember that what we think of as “the sixties” began for all intents and purposes on 8:00pm ET on Sunday, February 9, 1964.

The 2010 remaster shows all the depth of the original recordings; it’s quite amazing to realize the amount of care that went into these original sessions.

The songs themselves aren’t always the most inventive. “The Hully Gully” is the exact same song as Paul Revere and the Raiders‘ “Crisco Party,” sans the borderline pornographic subject matter. Despite its title, the Let’s Twist Again LP (the second half of this new CD) branches out in terms of subject matter a bit beyond dance-themed titles to include “I Almost Lost My Mind” and a cover of Gary “U.S.” Bonds‘ hit “Quarter to Three.” But the emphasis remains on fun and dancing. The gimmicky but clever “The Ray Charles-ton” must be heard to believed. It’s that rare example of a pastiche transformed into a dance number.

James Ritz‘s liner notes are well-researched and informative, but I found myself wishing for some — any — information about the band that played on these sides. Ritz refers to “the Cameo-Parkway house band” but elaborates little further. Still, that’s a minor quibble.

Like all of the Cameo-Parkway material, these albums have been long, long, long out of print. As a kid, I found Let’s Twist Again in my parents’ vinyl collection between movie soundtracks and Meet the Beatles, and paid it little attention. That was my mistake, one that’s now been corrected. Serious props to Collectors’ Choice and to ABKCO for finally prying open those vault doors to give modern-day listeners an aural glimpse into a time when pop music was about dancing.