Out of the Tunnel’s Mouth features the instrumental “Ghost in the Glass.” Hackett says that “I was influenced by working with my former keyboard colleague Nick Magnus.” There was a particular chord Magnus used “right around the time of Defector [1980]. I can’t tell you particularly technically what the name for it is, but if it was a B minor it would have a C# in it, for instance, and it’s one of those chords that jazzers like a lot, and its kind of mystical, doomy-sounding. I find it very full of promise.” 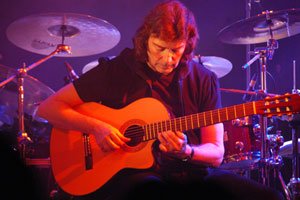 That track also features a string part laid atop the guitar, an approach influenced by some of the sounds Jeff Beck used on 1975’s Blow by Blow. Hackett says “we used real strings and Mellotron strings together. We used the real and the fake together; some slight distortion from the strings, makes it sound like the sort of strings that were being recorded in the 1950s in a way. There’s something about the quality of Mellotron strings. I use the actual tapes without them going through the Mellotron itself rather than going through the Mellotron [playback] head where you can’t actually control the individual notes that way. You play a clump of chords and you find some notes are going to be more edgy than others.”

Hackett explains how he manages to use Mellotron tapes without the machine itself. “Luckily enough, years ago I did some guitar work for the Mellotron people, and they gave me the DAT tape of the original Mellotron strings that had been recorded in a bedroom in 1953! It was three women in a bedroom in 1953,” he chuckles, “having as much fun as you could with violins!”

Onstage Hackett avoids the notoriously unreliable beast. “I prefer not to use a real Mellotron these days. Because having toured with Mellotrons for years, I’ve seen every keyboard player who ever used one having a nervous breakdown at some point or another. The technology just isn’t reliable. As soon as you get onstage, there comes a moment when the thing starts playing in a key all its own, and that’s if you can stabilize the electrical supply to it. And so I use a virtual…or Roger King uses a virtual version of the Mellotron, something infinitely more reliable.”

“But,” Hackett stresses, “the important thing is that we do use those original sounds. They are irreplaceable in a sense. They combine very well. They are more abrasive than real strings, and they will double guitar wonderfully, and they are a sound that will cut through any wall of sound because they’re so edgy.”

In spring 2010 Genesis was inducted into the Rock and Roll Hall of Fame. That institution — driven largely by the personal tastes of a handful of music industry figures — generally affords little respect to bands treading the progressive end of the musical landscape. Genesis’ selection likely had more to do with its commercial output, music created long after Hackett (and Peter Gabriel) had exited the group.

“Well, it’s funny, that,” Hackett muses, “because there are almost three different versions of Genesis. From the early years to what it became in the ’80s. In brief, all I know that I was asked to join a band that was presented to me as a songwriters’ collective. And when there were five of us, there were an awful lot of ideas flying around. I think that the stuff that musicians tend to mention is usually based on the early era, and normally the earlier the better, you know when Peter Gabriel was involved. Obviously I stayed for the making of two albums after he left, Trick of the Tail and Wind and Wuthering, both of which’ve got great moments on them.”

“And once I left,” he continues, “what happened was I think the video era kicked in very much around the same time. So I think as production techniques improved, and Phil [Collins] came into his own as a singer. And as a drummer with that sound, that famous [gated reverb-treated] sound, Phil influenced the production of so many records. That was a fabulous sound, and they created lots of room for that.”

“But,” Hackett observes, “then there’s another era of Genesis which is infinitely more detailed, where half the time instruments are fighting for supremacy. Particularly with the early mixes where it’s not necessarily clear what instrument is doing what. I feel the band had a kind of orchestral, sometimes demonic, often pastoral kind of sound to it. You couldn’t tell the difference between guitars and keyboards, and it really wasn’t at all obvious what was being played. And that,” he laughs, “was something that we milked, arguably to death. The idea of lots of 12-strings all playing together, which sounded almost like an orchestra of harpsichords. And we tended to use that kind of stuff a lot.” 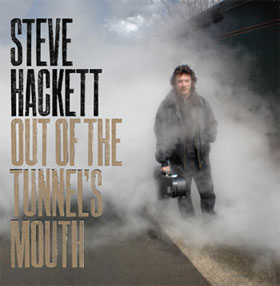 Hackett was pleased that presenter Trey Anastasio‘s Hall of Fame speech shone a light on the contributions of the early Genesis. “You know,” Hackett comments, “that was a very exciting time for me, and I was thrilled to work with the band at a time when we were more innovative, perhaps. I think that a band like Pink Floyd, for instance, stayed truer to their roots in terms of stressing atmosphere perhaps at the expense of accessibility and radio-friendliness, but Genesis went the other route. And it’s really up to the listener to determine which era they’re most drawn to. I think both are equally valid, but I like to think the outfit that I joined became a fusion band, a fusion of so many disparate styles, and gloriously pan-genre oriented.”

The official release date for Out of the Tunnel’s Mouth is June 8 2010. Early copies of the physical CD include a bonus disc including live tracks from Hackett’s touring band. Modern-day performances of some old Genesis favorites are included: “Blood on the Rooftops” from Wind and Wuthering (Hackett’s last album with Genesis), “Firth of Fifth” from the tour-de-force Selling England by the Pound and two songs from the 1974 opus The Lamb Lies Down on Broadway. Hackett’s tour of North America begins June 18; more dates may be added. For more details, the only official Steve Hackett web site is www.hackettsongs.com