Some songwriters claim that music comes to them fully formed; others craft the songs from the ground up, bit by bit. Steve Hackett says that “I find that songs don’t come fully-formed, but some sections come fully-formed. Normally I’ve got a giant jigsaw with a thousand different disconnected bits that sometimes seem to belong together, and even things that don’t belong together are put together, often for the sake of contrast and dynamics.” 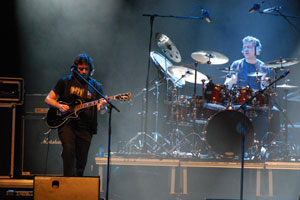 As an example, he cites the new track “Fire on the Moon,” with what he describes as “a small, bewildered childlike naïve verse, followed by the explosive primal scream in the chorus.” That song developed out of a very difficult and personal set of circumstances for Steve Hackett. “That particular tune,” he admits, “was really a kind of an attempt to convey the idea of a nervous breakdown — of all-out deep depression — but to convey it in song, rather than look at anybody else’s mythologies. It was time to examine what was going on inside me and how I felt at the time; I felt my world was crumbling after my divorce. And so I was just trying to cope with staying sane at that point. And I thought that the best thing to do was to convey all these feelings of anxiety. It sometimes used to manifest itself like a black cloud descending, or feeling like I was losing my grip, so I thought, ‘well, let’s not let that go to waste.'” Drawing from that authentic well of emotion is preferable to Hackett; he characterizes the alternative as “looking it up in a dictionary or in books, vicarious fulfillment in lyrics via other people’s stories.” In the end, the experience has had positive effects for him: “My own life was certainly becoming rich in experience at that point. The innocence was gone, but it did give me a very good basis for starting the tune.”

That organic feeling shines through all of the admittedly-precise technique on Out of the Tunnel’s Mouth. The first half of “Emerald And Ash” features precise vocal harmonies — all from Hackett himself — while the song’s second half adds in the voice of Amanda Lehmann, who’s also a member of Hackett’s touring band. “It’s very nice to work with a girl’s voice again,” Hackett admits. Lehmann is, he says, “full-on on tracks like ‘Sleepers’ and ‘Still Waters,’ for instance, and I’m very pleased with that combination of male and female voices.”

On the track “Still Waters” Hackett was aiming for a feel similar to “a gospel chorus. But I wanted slow blues and I wanted the guitar to be the voice, really.” He points out that “the lyrics on the verse were written by my partner Jo, who’s a girl, but she wrote it as though it was from a chauvinist man’s point of view. And so all of those allusions to ladies of the night out in Storyville actually came from her pen rather than mine! But the idea, of course, is that still waters run deep. So we have the verse that refers to all these show girls, and the whole bought-and-paid-for scene, and compared with somebody who’s more demure, but just as passionate of course, if not more so. And so I think the song strikes a blow for all the quiet ones.” 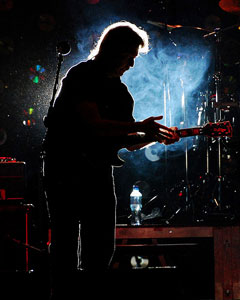 “Still Waters” is also, Hackett admits, “an excuse to play blues guitar. I feel that within expectation of what progressive listeners prefer listening to, part of the time they find the 12-bar blues a little bit too basic for them. But it’s not the case of what’s being done, but how you’re doing it, I think.

The album wraps up with “Last Train to Istanbul,” a musical marriage of Eastern and Western styles. Hackett recalls that his interest in world music started decades ago. “I think it was probably in ’65 or ’66 with the Yardbirds. Jeff Beck was kicking in the feedback and the Moorish influences and the Arabian-sounding stuff. And really, I think George Harrison was picking up the sitar at around the same time. There’s something about that, the first time that we were hearing the idea of quarter-tones and the ideas of inflections that were coming so naturally to him at the time that paved the way for world music. Of course, world music, you have to lay it at Harrison’s door when it started.”

For “Last Train to Istanbul” Hackett says he “was influenced by some Turkish music that I heard in Sarajevo, and it struck me that Turkish music sounded as if it were a sitar solo given over to an orchestra to play, and then something improvised on top of that again. The idea of music flying in all directions sounded impossibly exotic. So there’s one phrase on ‘Last Train to Istanbul’ where we’re playing in opposite directions, and that was really when what I was looking for…I was looking for that moment. And with that thing you can’t tell what the hell’s being played, but it just sounds so marvelously exotic. 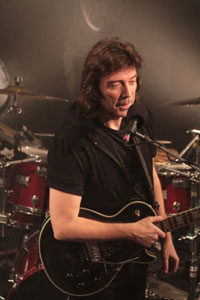 Back in the Genesis days, many songs were credited as group efforts. But Hackett explains that “although everything that was written in Genesis was credited to everybody, not everything was written eyeball-to-eyeball. People were tending to bring in things in bits, and things were written face-to-face.” For Out of the Tunnel’s Mouth, Hackett composed alone and with Jo Lehmann, Roger King and a select few others. “I like both methods, really,” he says. “In the main I find most really great writing tends to go on in private, and then arranging things is the whole name of the game then.”

He elaborates on his understanding of the songwriting process. “I think that what has to happen is that the courageous start of a particular idea in the main has got to come from outside. And then you bring it in and turn an instrumental riff into a great song. Once you’ve got some idea of the rhythm, some idea of the chords, the atmosphere, it can set itself up for good writing. But I do try to get the best out of the people that I work with. For instance, today we — Jo Lehmann’s sister Amanda Lehmann and myself — and she was singing some stuff from a new tune of mine. We did about three tunes in one day. She’d sing harmony parts, and it was great just to see how it would shape up. Bit by bit, she covered all the harmonies that I did. And then she came up with some other ideas as well.”

Hackett says, “I’ve had a stunning day of recording today. You know, right at the end of this tune we were working on I was trying to get a note. I was trying to sing it myself and I couldn’t. I just knew that either I had to do it my androgynous best or maybe it would be a girl’s voice. And a girl singing that is just so joyful, to sing a note like that. You can’t do it all yourself, that’s what it comes down to. That’s what I’ve discovered.”

Born in 1950, Steve Hackett is a bit younger than the first wave of the British Invasion or beat group artists. “When I was growing up in the 60s,” he recalls, “the guys that were playing the great blues guitar were all five years older than me. But at the time when I was started listening to rock — I was buying my first records in about 1959, I think it was — I would’ve been buying Cliff Richard and the Shadows back in those days.” 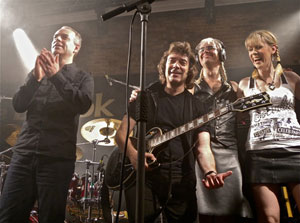 He continues, “It was an interesting time, but it was really not until around 1964 or 1965, whenever the Stones started doing their first album and Brian Jones was playing bottleneck guitar. It was the first time I really heard a guitar riff was the solo on ‘I Wanna Be Your Man.’ It was the first time I heard a guitar absolutely sounding right for me. You know, I was fascinated by the sound of guitars in the early days…the overdrive and the scream aspect of that that was something that was unforgettable for me. It was really the aural equivalent of getting on a Harley-Davidson bike and doing 100 suddenly. Everything else was like a Morris Minor doing 30 miles an hour! And that was the difference for me. It was musical delinquency. And it was glorious.”

Hackett’s shredding guitar approach on the breakneck “Tubehead” calls to mind the style of a slightly younger player, Joe Satriani. On the track, Hackett doubles the guitar attack with keyboard. But they don’t sound like keyboards. “There are moments,” Hackett notes with pride, “where you simply can’t tell if it’s guitar or synth. We used a keyboard sound that was a sample of a Fender Rhodes piano put through distortion and it meant that Roger could bend the notes on that with a flywheel as well. We found that approach more engaging and a more interesting sound than doing a solo guitar part. So you’ve got guitars that sound like keyboards, and keyboards that sound like guitars, all on the same tune.” He pauses then mentions, “that the area where I was most interested with Genesis in the very early days. It wasn’t always possible to tell what was playing, and I must admit I do enjoy that area very much: when I’m not really sure what I’m hearing. That’s always a great thing, I find.”

In the final installment in this three-part Steve Hackett feature, we’ll discuss instruments, technology, old Genesis albums and that band’s recent induction in to the rock and Roll Hall of Fame.