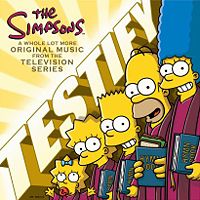 On this date in 1987, The Simpsons animated short debuted as part of The Tracey Ullman Show. Over the years, one of the most enduring components of The Simpsons has been its music. Deftly straddling high- and lowbrow, the songs are just plain amusing (and, critically, move the story along), but go deeper and you’ll find plenty to keep music historians and musicologists busy. Here’s a review of the most recent compilation — at least the third, by my count — of songs from The Simpsons.

Thank god for The Simpsons. And thank god for their musical director Alf Clausen. This 67-year old composer is responsible for some of the cleverest music ever to be heard on television. For nearly twenty years Clausen has applied his immeasurable talents to crafting musical pieces for the show. These pieces do much, much more than serve as backing: they move the plot along (often much faster than mere dialogue could do) and in the process manage to pack a dizzying number of musical references into the story.

This Shout! Factory release follows two late 90s Rhino compilations, this time concentrating on songs from the last nine seasons. On Testify, the liner notes go into a bit more detail, spelling out who does what, and from which episode. Oftentimes comedy albums don’t hold up to repeated listening; this album is a clear exception.

Note: While unique in its own right, Walter Murphy’s Broadway-style work on Family Guy is something of a homage to Clausen’s Simpsons work; Clausen’s success paved the way for the Family Guy music. So when will we see a Family Guy musical compilation? I’m waiting…