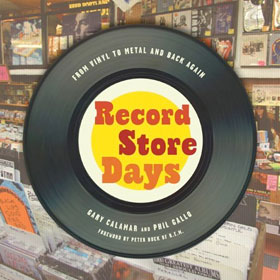 Viewed through one particular prism, Record Store Days is one long mash note to the bygone era of brick-and-mortar retail record shops. The book by a pair of serious musos — Gary Calamar and Phil Gallo — is chock full of heartfelt reminiscences of those bygone days. But Record Store Days is much more than that.

The book does chart a social history of sorts: the development, rise and eventual fall of the record store. Within the book’s 200-plus pages is a clear argument as to why record stores were valuable. But Record Store Days makes a clear and convincing case for why the shops remain important in the 21st century. Supporting the authors’ assertions are mini-essays and select quotes from musicians well known and obscure.

And the book is even more than all that. Lovingly designed — it’s no accident that the book is square, like a record sleeve — Record Store Days is full of vintage photos of long-gone stores. But the book is, in the end, more about people. People that owned the stores, worked in the stores, hung out and shopped in the stores: those are the real stars of Record Store Days. And in the end it’s people that made those stores what they were (and are). Flesh, blood, brick and mortar.

Record Store Days manages to pack a lot of history into its pages. The rise of bootlegs, the changes in the industry brought on by digital technology, the success of independent shops, the popularity of in-store performances…all are touched upon in a thoughtful and incisive manner.

In the end, Record Store Days strikes a tone more hopeful than nostalgic. The authors argue in favor of your ongoing support of indie shops, and if you’re the sort who’d enjoy this book (which does have a wide appeal) then you’ll likely be swayed by their argument. If you even need such persuasion.

The book works equally well as oral history, coffee table decoration, picture book, and more. The only thing that’s lacking is a CD, but then if you want one of those, go to a record store.