Album Review: Johnny Winter And – Live at the Fillmore East 10/3/70 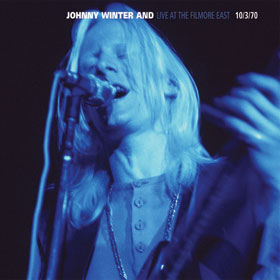 Let’s get this out of the way right up front: you’re either going to absolutely love Live at the Fillmore East 10/3/70, the new CCM Live archival release of an early date featuring Johnny Winter And, or you’re gonna hate it.

Me, I’m firmly in the former camp. And while it’s true than an hour-plus of blistering and lengthy guitar solos isn’t everyone’s cup of tea, there are times when it’s mine. And if you do dig such things as onstage guitar wankfests — especially of the blues-rock variety — then this is one disc you’ll likely want to hear.

In 1970, Texas blues guitar sensation Johnny Winter had recently parted ways with his original blues-based band, and had recruited the McCoys (of “Hang On Sloopy” fame/infamy) as his new backing band. That group, despite the frat-garage aesthetic of their most well-known song, was in fact led by a guitarist of no small talent himself: Rick Derringer (neé Zehringer). So with Derringer in the fold, Winter had a formidable guitar attack. Never merely a rhythm guitarist, Derringer trades leads with Winter on this new archival set.

The band charges out of the gate with the relatively brief Winter original “Guess I’ll Go Away,” the first track on the group’s recently released self titled album (Johnny Winter And — that’s the name of the band). Then they head straight into the blues-rock standard “Good Morning Little Schoolgirl,” a tune then quite well known as a staple of Ten Years After‘s live set. (In the early 70s festival scene, Winter and Alvin Lee‘s band often appeared at the same events.)

Winter’s version of “Rock and Roll Hoochie Koo” is here as well, in a rendition true to its studio counterpart. It would be a few years yet before Derringer would record his own version — he wrote it, after all — for which he would be rewarded a large hit.

A very, very long (over 22 minutes!) version of “It’s My Own Fault” fills a full third of the disc’s run time. This version nearly doubles the length of the version included on the group’s 1971 live album (creatively titled Johnny Winter And Live). But since that LP ran a relatively brief forty-plus minutes, one suspects that it was edited for content. Thus, the version here is the real deal. In fact, since that ’71 LP was sourced from tapes of two gigs — south Florida’s Pirate’s World (an amusement park I attended as a six-year-old right around the time of this show) and a show at the Fillmore East — chances are very good that this is in fact the same performance, unedited. I’m not going to do a side-by-side comparison; if you do, feel free to comment below on the results.

In it, Derringer and Winter take turns soloing. The slow blues starts off with Derringer (in your stereo’s left channel, as he will remain the entire set) cutting some guitar lines that are interesting enough on their own. In the right channel, Winter cranks out his trademark fast-then-slow-then-lightning-fast guitar runs, and his vocal turn is as heartfelt and soulful as ever. The band here proves itself at least the equal of the Allman Brothers‘ efforts in a similar vein. A rendition of Winter’s best known cover follows. His slide guitar work on Dylan‘s “Highway 61 Revisited” is predictably incendiary, but his vocals are garbled and rushed. Maybe he’s channeling Dylan…? There are better live versions of Winter playing the song out there.

An eighteen-minute “Mean Town Blues” wraps up the main set. The Winter original was also on the studio album and the ’71 live record. Here Winter again plays slide and serves up a style familiar to fans of Savoy Brown.

The band comes back onstage for an encore of Muddy Waters‘ “Rollin’ and Tumblin.'” Winter had included a studio version of the track on his 1969 album Progressive Blues Experiment. Here it’s a bit longer, but certainly not an extended workout. Maybe his fingers were tired by this point.

Packaging on the set is basic but nice enough. It’s clear the set was rush-released: there’s a typo on the album cover. Never a good sign, that. But nobody will buy this set for the album graphics. It’s all about the music.

Here’s a suggestion, dear reader: your enjoyment of this album will be greatly aided if you play it on a good stereo. The insistent high frequencies of the Winter-Derringer guitar duels do not lend themselves well to mp3 or most car stereos. Crank this one up on your home stereo and let the neighbors enjoy them some classic Johnny Winter too.