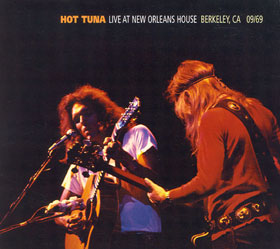 Is “power blues” your thing? The answer to that question is a good indicator as to how well you’ll enjoy the Collectors Choice Live archival release from Hot Tuna, Live at New Orleans House, Berkeley CA 09/69. Titled like a bootlegger might name it, this set finds the acoustic version of the Jorma Kaukonen/Jack Casady duo playing a set split nearly evenly between original compositions and blues classics.

Though they’re playing in a country blues manner akin to Sony Terry and Brownie McGhee, here Hot Tuna really does tear it up. Casady’s suitably busy bass lines don’t intrude on the songs; they propel them forward. The fretboard interplay between ace guitarist Kaukonen and bassist Casady is fiery; at times they give listeners an idea of what Cream might have sounded like on acoustic instruments (and without the thunderous traps of Ginger Baker).

The country blues of “Keep on Truckin'” uses a well-worn melody that will be strikingly familiar to even the most casual Arlo Guthrie fan. The harmonica playing on the song is delightful, and may remind some listeners of Canned Heat.

The pair of Jefferson Airplane veterans changes things up on each song; while in lesser hands the blues can sometimes get tiresome and repetitive, Hot Tuna never lets that happen. Fans of the acoustic blues variants of rock (think of Workingman’s Dead and American Beauty era Grateful Dead) will find much to enjoy in this hour-plus set. The intimate setting and well-behaved crowd help make it a beautifully-recorded document of this set from the final months of the sixties.

Hot Tuna fans who recognize both the venue and several of the songs may well wonder if this disc is yet another repackaging of their first album. It’s not; Hot Tuna played quite a few gigs at New Orleans House, and many were recorded. As Richie Unterberger notes in his brief but informative liner notes, this disc consists completely of previously unreleased performances.