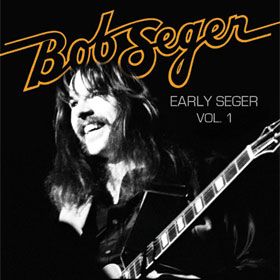 Semantic purists and hardcore Bob Seger fans might take small issue with the title of this new collection, but Early Seger Vol. 1 is pretty much as advertised. The first half of this ten-track collection surveys the pre-major fame era of Bob Seger’s recorded output.

Seger is, of course, the artist about who took ten years to become an overnight sensation. His earliest notable tracks like “Heavy Music,” “Ramblin’ Gamblin’ Man” and the against-the-tide comedy attempt “Ballad of the Yellow Beret” aren’t included here, but a clutch of worthy tracks are.

The disc kicks off with two fairly radical reworkings of other composers’ songs. “Midnight Rider” is imbued with a feel quite different from the Allman Brothers‘ version. And thanks in no small part to its soaring Hammond organ solo, Tim Hardin‘s “If I were a Carpenter” has a gospel vibe. Both of these 1972 tracks — from Back in ’72 and Smokin’ O.P.’s, respectively — are rendered as midtempo numbers.

Not so for “Get Out of Denver,” the greatest Chuck Berry song Berry never wrote. From Seger’s overlooked 1974 LP Seven, “Get out of Denver” features a double-tracked Seger vocal and an insistent beat. The arrangement points the way toward Seger’s later — and wildly more commercially successful — rock numbers. Most fans will be more familiar with the live versions from the platinum-selling 1976 “Live” Bullet album.

Things slow down for “Someday,” originally on Smokin’ O.P.’s. The piano-and-strings arrangement will be viewed as heartfelt by some, syrupy and overproduced by others. It certainly blunts the rocking impact of the disc, but in fairness it does help paint a more balanced portrait of the artist.

“U.M.C. (Upper Middle Class)” is a piano-based boogie shuffle with an intimate Seger vocal. This Seven track was another popular staple of Seger’s live set, and a version is also on “Live” Bullet. A wah-wah guitar solo and an organ workout add lots of dynamics.

A reworked version of Seven‘s “Long Song Comin'” features 2009 overdubs. The song has a feel that’s perhaps closest to what fans of Seger’s biggest hits would expect.

The four remaining tracks aren’t really “early” Seger either. Three date from the mid 80s (the other is from ’77) and all underwent post-production overdubs in 2009. Recorded (originally) in Muscle Shoals with that town’s famous sessioners, “Star Tonight” is either stately or plodding, depending on one’s point of view. Fans of “Like a Rock” (the song not the jingle) will probably dig it.

“Gets Ya Pumpin'” is a fine tune, but its arrangement — heavy on female backing vocals and horns — threatens to overwhelm the song itself. “Wildfire” features Little Feat pianist Billy Payne, but the lyrics try too hard for that anthemic American roots rock vibe. Cynics might wonder if General Motors was considering putting out a Wildfire brand pickup truck. “Days When the Rain Would Come” dates from the same sessions as “Wildfire.” While it too is formulaic (lyrics start off with “I remember…”) and mines a familiar arrangement, it’s a notch above the other previously-release tracks.

Taken as a whole, these previously-unreleased-now-reworked tracks (which together make up fully half of Early Seger Vol. 1) are fine meat and potatoes rock, but don’t rank among Seger’s best work. Put another way, they’re not exactly lost treasures. But the first five tracks are unjustly forgotten and excellent numbers that deserve to be heard. Overall, Early Seger Vol. 1 is a solid and enjoyable compilation that — despite its title — ultimately neither attempts nor succeeds in being a comprehensive overview of, well, early Seger.