For veteran cosmic rockers the Moody Blues, building the set list is A Question of Balance.

The band has released only one album of new material in the 21st century (2003’s Christmas). Edge allows that the Moodys would “love for somebody to come along and sign the band to a recording contract.” He says that they’re “in permanent negotiations, but there’s nothing on the horizon.”

During the sixties and seventies, Edge says, “we’d spend a month in the studio, and let [album ideas and concepts] grow in there, and have an organic feel to it.” But today’s market is different: “Small independent labels, they want you in and out of the studio in three hours!” He marvels that some labels “start wanting a piece of the road action.” Edge cites several labels’ policy of demanding ten percent of a band’s touring revenue; they use the argument that albums are merely “loss leaders to get people to the concerts.” His position: “They ain’t gonna get that” from the Moody Blues.

So instead the band puts its effort into live performance. The bulk of a Moody Blues concert audience is baby boomers eager to relive their youth, if only for a few hours. But Edge notes that “we see a sprinkling of younger people throughout the audience, which makes us feel very happy.” He quotes Justin Hayward’s explanation of why younger people might find the Moodys’ music appealing: “Well, they’re the same age we were when we wrote the songs!” 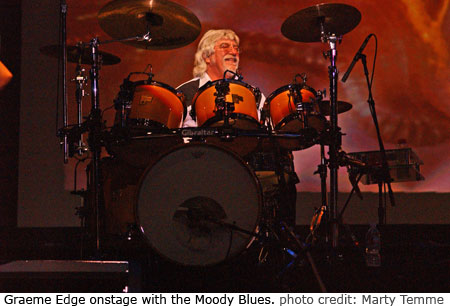 In recent years there have been several live tours re-creating classic albums from the psychedelic era. Besides Brian Wilson‘s high-profile tours, Love‘s Arthur Lee performed 1967’s Forever Changes in concert worldwide. And in 2008 the Zombies performed their 1968 album Odessey and Oracle [sic] to wide acclaim. The Moody Blues’ Days of Future Passed seems ripe for such a treatment.

“We have considered it,” Edge admits, “but there’s a problem: we wouldn’t have somebody else sing a Mike Pinder song. It wouldn’t be right; there’s a phoniness to that. So we’d rather present a nice mix-and-match from all of the records.” Keyboardist, singer and Mellotron wizard Mike Pinder lost his taste for touring and retired from the band in 1978; flautist/vocalist Ray Thomas retired for health reasons in 2002.

A highlight of the current tour is the VIP Package. In addition to a seat at the show, VIP purchasers get a pre-show audience with the band. “It’s a new idea; I’m a bit nervous about it,” Edge admits. “We’ll come out and answer questions. The promoter says, ‘What you’ve got to do is just tell them some amusing stories from on the road.'” After a pregnant pause, Edge bursts into laughter and says, “I don’t know if I’ll be able to say those; there might be some young people there!”

A typical 21st century Moody Blues concert includes all the hits, but the band balances those with a selection of deep album cuts for the hardcore fans. “There’s the big six — as we call them — that we have to play,” Edge says. “And I agree with people; we should play them. I’m not one of those people that says, ‘I’m so bored with playing those.’ My whole life was changed by ‘Nights in White Satin,’ and I love it every night.

“During certain songs — ‘Tuesday Afternoon,’ or one of the old big favorites — I love to look down into the audience,” Edge explains. “As we start the song, I’ll see people lean in to each other and openly say, ‘Oh, I love this one.’ You draw energy from that, and use it in the show. Every one of us is an old ham; we love playing live.

“But we’re always polishing the diamond, as we say. We’re often putting a ‘new old song’ into the show; every time we go out on tour, we probably put five or six new-old ones in. I’m lobbying to get ‘Gypsy’ [from 1969’s To Our Children’s Childrens’ Children] into the show; we haven’t played that for awhile. I can show off on the drums a bit on that one, y’know.” Pausing conspiratorially, Edge adds, “Which I enjoy.”