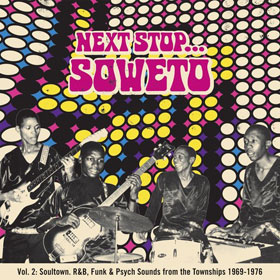 South Africa in the 60s, 70s and 80s was becoming increasingly isolated. Culturally and politically, the minority-rule apartheid country faced increasing ostracizing. Many countries — in an all-too-rare-example of unified action based on widely held concepts of right and wrong — boycotted the country.

Internally, the doors were closed as well. The minority leaders did not want “bad” influences from outside South African borders to find their way into the ears, eyes and hearts of its subjugated indigenous African citizens. As such, they encouraged certain “native” forms of music, but strongly discouraged rock, soul and other popular music genres. The fact that these forms owed their origins in large part to African influence, well, that was seemingly lost on these fellows. But then they weren’t the most nuanced thinkers.

As is always the case, some music got through. It always does. I remember speaking with a friend several years ago. A Russian émigré, he recounted to me how Western rock records would get smuggled into the Soviet bloc, and were then duplicated (pirated, technically) and distributed underground. But since petroleum-based vinyl was in short supply, people collected discarded x-ray film, punched a hole in the middle and cut those as “discs.” Music always gets through.

And so it did into the Soweto (South Western Townships) regions of South Africa. And one result was home-grown music that distilled those influences while adding its own indigenous character. Perhaps more surprising than the fact that this music was created is the fact that it has lasted. Strut Records has embarked on a release program of this rescued music. The latest volume is titled Next Stop…Soweto: Vol. 2 Soultown. R&B, Funk & Psych Sounds from the Townships 1969-1976. Long title, but it tells you the beginning of what you need to know.

Even the most rabid crate-digger will be totally unfamiliar with these 22 sides. All original tunes by Soweto artists, Next Stop…Soweto Vol. 2 is filled with a wide array of styles. Listeners will hear artists influenced by Booker T & the MGs; there’s lots in that style here. But there’s a percussion-centric vibe to many of the tracks that has more in common with, say, Santana. And owing to the economic situation in South Africa, the keyboard sounds are more likely to emanate from a (relatively inexpensive transistor-based) Farfisa than a Hammond, giving the whole affair a vaguely Question Mark and the Mysterians feel.

One track sounds a bit like ZZ Top. Another has vague feel of Spirit. Yet another contains echoes of James Brown. But in all cases the music is filtered through a decidedly South African sensibility. Next Stop…Soweto Vol. 2 is another example of the fascinating cross-pollination that is a hallmark of 20th century pop music.

Plenty of surprises abound. The instrumental “Funky Message” by the Heroes features a chiming electric twelve-string guitar that wouldn’t sound completely out of place on a Buffalo Springfield album. But here’s it paired with a gurgling Leslie’d organ, resulting in something far more soulful.

The stuttering organ fills and beefy horn charts on “Nkuli’s Shuffle” by The Klooks sounds like a cross between early-early (pre-Clapton, I mean) Bluesbreakers and Sun Ra.

Ace organ playing is the highlight of “Skophom,” a cut by the S. A. Move. The track is led by manic glissandos and extremely soulful chording vaguely reminiscent of a really-amped up Billy Preston. It’s perhaps the best track among many great ones. Each listener will find his or her own favorites, though: there’s plenty to like.

Philip Malela‘s “Tiba Kamo” suggests that the work of Isaac Hayes made its way to South African listeners. Bracing organ fills, wah-wah guitar and funky sax breaks all hold forth in support of rousing vocals; this track could have easily served as effective backing on any number of Blaxploitation soundtracks.

Listeners who don’t understand Zulu, Sothor, Tswana or the other linguistic variants spoken in South Africa need not worry: on the vocal numbers, the feel gets through despite the language barrier, and most of the tracks are instrumental. (One track is sung in English.)

For the most part the music on Next Stop…Soweto Vol. 2 is jubilant, celebratory, upbeat. In the face of officially-sanctioned oppression, the Soweto citizens did what they could: they got on with their lives, and sang, played and danced whenever possible.

Important and fascinating as a historical document, Next Stop…Soweto Vol. 2 is no less significant as musical entertainment. The disc is both a fun listen and a useful reminder of the power of music.