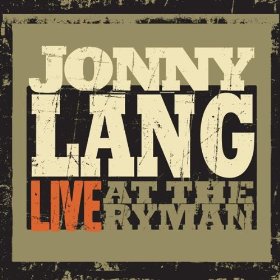 At this late date there’s less point than there used to be in calling Jonny Lang a young blues guitarist. Now in his thirties, Lang is a veteran performer and recording artist. He released five albums in just over eleven years, but he’s waited this long to record a live album. Live at the Ryman finds Lang and his band onstage at Nashville’s famed auditorium, home to an intimate vibe and excellent acoustics. (Neil Young recently recorded a live set there as well.)

As Lang has grown, gospel influences have assumed greater importance in his music (and, by most accounts, in his life as well). There’s an unmistakable gospel flavor to all of Live at the Ryman‘s twelve tracks, both in structure and delivery. Throughout the set, Lang and his fellow musicians and vocalists turn in a soulful yet surprisingly loose performance. Harmonies are on-the-note but not in perfect sync, and rather than coming off sloppy, that quality vouches for the set’s authenticity.

While Lang’s fiery guitar work is a centerpiece, it’s well-integrated into the songs. Instrumental interplay abounds, but Live at the Ryman is decidedly about the vocals. The set surveys tracks from throughout Lang’s career, and features a Tinsley Ellis number (“A Quitter Never Wins”) as well.

The lyrics of Lang’s newer material do tend toward the preachy side (“It’s never too late to turn around,” to cite one of many examples), but it’s fairly easy to tune out the words (if that’s your chosen approach) and enjoy the playing and the texture of the vocals.

“Give Me Up Again” shamelessly lifts its verse melody from the Impressions’ 1965 hit “People Get Ready.” There are times when such a lift is a homage, others when it’s ripoff. Here the lines are blurred: when you lift a phrase, it shouldn’t end up as the strongest component of your song. Besides, didn’t somebody once say, “Thou shalt not steal?”

The lengthy “I Am” aims for a deeply soulful gospel feel, but what was undoubtedly thrilling in person loses something on an audio-only release. Lang’s singing is surprisingly expressive, but again the lyrical content will resonate mostly to those of a particular spiritual inclination. Others may be less impressed: repeated recitations of “everything is gonna be all right” may spur some listeners toward the skip button.

But in the end, pretty much everything on Live at the Ryman truly is in fact all right. The pacing is excellent. The songs tumble into one another, demonstrating that hard-gigging approach has paid off. Lang and his band connect with the audience yet waste little time with superfluous banter. And as expected, the sound is peerless, striking the right balance between crystal-clear and organically live.

Live at the Ryman is worth owning for Lang fans, and worth a listen for anyone interested in contemporary blues with a strong gospel feel.