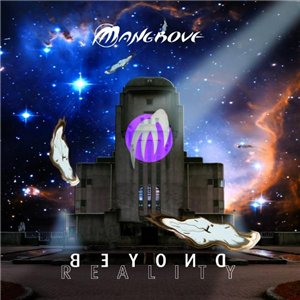 Gentle, pastoral guitar picking starts off the epic-length “Daydreamers’ Nightmare” on Beyond Reality, the latest from Dutch progressive outfit Mangrove. An airy synth line doubles the melodic phrase, and then — as prog is wont to do — the rest of the band thunders in, and a soaring electric guitar lead is laid atop the entire thing. Slow chord progressions with plenty of air in them are the order of the day. Three minutes in, the virtual stage goes dark except for a lone electric piano and vocal. Theatrical in its presentation — and highly melodic in its delivery — “Daydreamers’ Nightmare” unfolds slowly, making deft and effective use of those oft-abused progressive rock trademarks (fast/slow, loud/quiet, hard/soft, complicated/simple).

Though possessed of a feel that will be familiar to followers of the genre, the song isn’t overly reminiscent of any particular act. And that’s all to the good. Rather than serving as a showcase for one particular virtuoso, Beyond Reality is a well-balanced album that provides plenty of vocals and lyrics, while still delivering the requisite instrumental spotlights. No player overshadows another; the songs are often built around keyboard parts, but tasty guitar solos abound. Some seven-plus minutes in, “Daydreamers’ Nightmare” really breaks out into epic fashion, and here the band does sonically evoke some of the past greats. The thunderous rhythm section recalls some of the best work of Rush (minus the Donald Duck vocals, of course) and the choir Mellotron calls to mind A Trick of the Tail-era Genesis.

The signature synth line on “Time Will Tell” has a texture highly reminiscent of Genesis’ “Follow You Follow Me,” but the song’s overall structure is more ambitious than that 1978 pop hit. The song’s midsection segues into an almost funk-jazz vibe, but that’s quickly supplanted by an aural windstorm that leads into a pastiche of Pink Floyd‘s mighty “Echoes.” Reverbed piano, glacial tempo, hypnotic bass, and buttery slide guitar all add up to the most obvious, unashamed cop of “Echoes” ever to be recorded. Even the signature Nick Mason drum fill (you know the one: dumdum-dum-tadum) makes a subtle appearance. After a few minutes of that, Mangrove updates things a bit by referencing some chord changes from Dark Side of the Moon. Little of Beyond Reality is pastiche (or ripoff, if you’re feeling unkind), but whole sections of “Time Will Tell” are undeniably Floydian.

The ballad “Love and Beyond” is built around more traditional instrumentation including acoustic guitar and piano. The members of Mangrove are clearly not technocrats; a song like this needs little filigree, and the arrangement is note-perfect. A brief and lovely guitar solo from Roland van der Horst leads into a verse with organ underpinning, and then the arrangement drops back to the spare guitar-piano-vocal approach. Vaguely reminiscent of the best work from (early) Styx, “Love and Beyond” would be a prime candidate for an AOR radio ballad, if such a thing still existed.

Church bells and spooky strings set the scene for “Reality Fades,” an instrumental track with a sweeping, cinematic arrangement. But soon enough, the band explodes into a bombastic, fast-paced aesthetic, and the song quickly progresses through a series of movements. The track is essentially a series of (mercifully brief) solo pieces, and is likely a highlight of Mangrove’s live show (they premiered Beyond Reality as an onstage set piece in June 2009).

The title track is another song-based production. Despite the use of a few less-than-standard chord changes, “Beyond Reality” is a rock-ballad number. Plenty of shade and light keeps the song interesting, and though the track employs verse-chorus structure, it’s still clearly progressive. The guitar solo is a highlight; if van der Horst harbors any tendency to overplay, he keeps it well in check, leaving ’em wanting more. The rousing end section of the song is evocative of the closing of Grobschnitt‘s “Rockpommel’s Land.”

The band fires on all cylinders on the album closer “Voyager.” The song features a piano part that is oddly but inescapably redolent of Foreigner‘s “Cold As Ice.” Roland van den Horst shows off his ability to shriek (in tune) when called upon to do so. Chris Jonker‘s fleet keyboards — here, mostly organ — head for Uriah Heep territory. The rhythm section of Peter Drost (bass) and Joost Hagermeijer (drums) holds things together with extreme force. The melodramatic chord shifts and tempo changes suit an album-closer remarkably well. An atmospheric organ-guitar interlude is good enough to stand on its own. Parts of the song even sound a bit like Klaatu, circa Hope.

Jonker uses a plethora of keyboards on the album. Almost all are possessed of a seventies aura: Rhodes, Wurlitzer, Mellotron, analog synths. Their use gives the album a firm grounding in the proud tradition of progressive rock. But rather than aim for flash or speed, Jonker’s keyboard parts establish melodic lines. The band’s song structures are pop-based, though, and in fact if one can imagine a cross between a classicist prog band of the early 70s and more song-based mainstream rock, that’s a good approximation of the Mangrove sound.

The liner notes’ gimmick of reproducing all of the lyrics in mirror-image is a goofy one, but rather than coming off as pretentious, it seems instead rather to be a piss-take on prog rock’s generally self-important attitude. The band photos suggest they had a good time at the photo session, coming off like nothing so much as a 21st prog version of the Monkees.

Mangrove is yet another of a growing crop of melodic prog rock groups based in Europe, a movement more interested in serving up songs than preening musically. Like the better among their peers, in fact Mangrove has it both ways — fiery playing welded to solid songcraft — on Beyond Reality.