In honor of the Martin Luther King National Holiday — (as a close friend wrote to me last night, “Remember to honor Dr. King. What he did, he did for all.”) — here’s a review from a year ago. 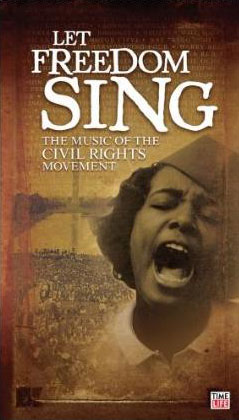 Don’t be put off by the Time Life logo on the new box set Let Freedom Sing: The Music of the Civil Rights Movement. If you do, you’ll miss an excellent thematic compilation. The sepia-tinted 3CD package is a (more or less) chronological survey of music relevant to the civil rights struggles in the USA. The set spans the period 1939 to present-day (because, y’know, it’s not as if the civil rights movement has seen its goals accomplished; there’s been progress, but we’ve a distance yet to go).From the still-unsettling strains of Billie Holiday‘s “Strange Fruit” to five cuts dating to the current decade, Let Freedom Sing offers a useful soundtrack to any civil rights retrospective. Which is, in one sense, what it is: in observance of Black History Month 2009, a related PBS documentary will air. [that set on DVD is reviewed here — ed.]

The excellent and detailed liner notes place each track in its sociological and musical context, and though the compilers are careful not to position the set as definitive, it’s pretty close. Or as close as you could get with three audio discs. While music consumers might expect a package with the Time Life imprint to be a haphazard, thrown-together affair, with selections determined primarily by what’s available for licensing, this set suggests that the label deserves a good bit more credit.

As a rock music aficionado–even one with a collection numbering in the several-thousands–I must admit that very little of this music was in my collection. This collection is a small step in the right direction. Some amazing and revelatory pieces are included, including Josh White‘s “Uncle Sam Says”, Gil Scot-Heron‘s classic “The Revolution Will Not Be Televised (arguably the first rap song, unless you count The Monkees‘ “Zilch”–ha) and Oscar Brown Jr.’s “Forty Acres and a Mule”.

Only a few white artists make the set (The Weavers, Dylan, Phil Ochs), but their inclusion makes it clear that this is neither a folk-protest comp nor a survey of African American artists. The mix makes the overall set even stronger.

One subtext of the liner notes deserves special mention. The compilers don’t shy away from an important historical fact, one that’s been swept under the rug: many of the early supporters of civil rights for all Americans were…wait for it…communists. Yes, those people who were so categorically painted as enemies of the state in the McCarthy era were in fact among the most ardent, vocal and active supports of overthrowing the racial injustices of American society. Kudos to the compilers of Let Freedom Sing for including this fact in the liner notes.

It’s worth mentioning that this set makes just plain good listening, even if the listener isn’t up for a history lesson. Artists both celebrated and obscure are represented; big hits and unreleased tracks sit side by side. Nearly sixty tracks run the emotional gamut, from hysterically funny (Ray Scott‘s “The Prayer”) to chilling, from despairing to hopeful (Lee Dorsey‘s “Yes, We Can, Part 1”, the track that lent its phrase to the groundbreaking, inspiring and successful campaign of our new president). It’s genre-spanning, with gospel, blues (electric and acoustic), rock, funk, soul, jazz, folk, hip-hop and more. Listeners will find Aretha, James, Mahalia, Sly, Marvin, Otis, and more. Original or early versions of songs destined to be rock hits are here, including John Lee Hooker‘s “The Motor City is Burning” (later covered by the Motor City Five [aka MC5]) and Smokey Robinson and the Miracles‘ “Abraham, Martin and John.” And again: more. Lots more.

Let Freedom Sing: The Music of the Civil Rights Movement is recommended in the strongest terms.