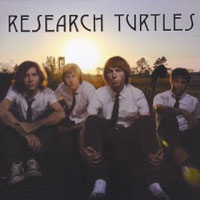 Despite the fact that Research Turtles are depicted on the cover of their self-titled, self-released CD as a sort of dirty-faced Knack for the 21st century, this Lake Charles Louisiana-based quartet has more in common with legendary powerpop band Shoes. “Let’s Get Carried Away” has the sound, feel and attitude of the pride of Zion IL, and the Norman brothers (bassist Jud and guitarist Joe) have voices that sound a good bit like Shoes’ John and Jeff Murphy. There really is something about sibling vocalists.

That said, Research Turtles do rock harder. The buzzing riff that kicks off “Let’s Get Carried Away” owes as much to grunge or 70s heavy rock. And there’s the thing: Research Turtles draw inspiration and influence from sources far and wide, with one unifying characteristic: quality.

It’s possible, really, to write an entire review that concentrates only on the opening track. It’s that good, and in many ways “Let’s Get Carried Away” is a distillation of the whole album. But the disc has ten other tracks, each of which has its charms.

“Damn” combines a lighter-waving riff with a lyrical sentiment that’s been voiced by every band from the Buddy Holly to the Partridge Family. “Mission” kicks off with a stumbling homage to the Ramones but quickly turns into something so poppy it would have fit on Green Day‘s Dookie. “Kiss Her Goodbye” is a 70s power ballad in three-quarter time.

“Cement Floor” starts out aping Led Zeppelin‘s “Communication Breakdown” but ends up as a cross between Interpol and Cheap Trick. (And they use the Beverly Hillbillies pronunciation of “cement,” by the way. Must be a Louisiana thing.) A snarkily-titled number called “The Riff Song” is just that, but it’s also more than that. Every song on Research Turtles is built on a dual foundation: a memorable riff and a catchy tune. Most powerpop bands get by — and successfully so — on one or the other. The songs on this disc are filled right to the brim with smart ideas, but the band is careful not to overfill them: none of the songs is overwrought.

“Tomorrow” is one of the least heavy numbers, though it too features some power chords in its reggae-inflected arrangement. But even the reggae angle is rendered with a light touch: those who (like this reviewer) have no use for reggae are still left with plenty to like in the song. The effective use of subtle flourishes (like vibro-slap) shows that the band puts a great deal of thought into placement of all sonic elements. “A Feeling” is a riff-centric number written (like all eleven tracks) by bassist Jud Norman. “925” is the disc’s most “modern rock” sounding number, but even it is worthwhile; it’s something of a pop take on the Clash.

The disc officially ends with “Break My Fall,” a catchy and memorable number that offers plenty of dynamics and variation. A sped-up instrumental section in the middle is a high point of the disc. A charming and disarming hidden bonus track shows what Research Turtles can do with an acoustic number; even without the power chords, the group’s compositional strength shines through.

This album does not sound like a self-released project; it has all the hallmarks of a successful major-label release, except for, well, the support that being on a major label can sometimes offer. Recommended.