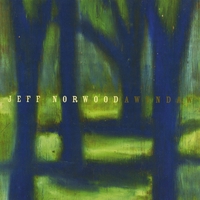 South Carolina acoustic bluesman Jeff Norwood conjures the spirits of Mississippi Fred McDowell and Robert Johnson on Awendaw. Using little more than (mostly) acoustic guitar, dobro, bass and footstomps, Norwood convincingly puts forth his tales in a style that’s authentic, not a mere pastiche. Familiar setting and characters populate Norwood’s song stories: the Devil, swamps, dusty roads and the like figure prominently in the nine songs. Singing in a voice soaked in just enough wear-and-tear to render the songs properly, Norwood turns out songs is spare arrangements that place the focus squarely on voice and guitar.

Norwood lives, writes and records in the titular locale, Awendaw SC, a tiny (pop. approx. 1200) coastal community between Charleston and Myrtle Beach, but likely worlds apart culturally from either.

“Walking Catfish Blues” illustrates that humor is an important ingredient in the blues; it need not be all melodrama, and Norwood demonstrates this. All of the tunes save one are Norwood originals. “Call Me Money” features distorted slide guitar, and calls to mind some of Johnny Winter‘s excursions into the Delta blues subgenre. On Fred McDowell’s “Kokomo Blues” Norwood lopes along; he makes the song his own while retaining the character of the composer’s style. Norwood also uses the tune to showcase his playing to a greater degree than on his original numbers.

Norwood manages three things on Awendaw: he serves up interesting and engaging song-stories that keep the listener involved; he plays in a style that purists would find little about to complain; and he changes things up enough musically to keep things interesting.