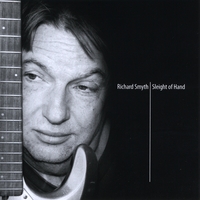 Good title. Smyth is an electric guitarist with a wide sonic palette, and his mastery is highlighted throughout the disc. Shades of Wired-era Jeff Beck and 70s Lee Ritenour are scattered across the disc’s ten tracks.

“Vicky’s Birthday” builds a jazz-inflected (but definitely rock) arrangement atop the riff from Don Nix‘s “Goin’ Down” but uses that riff merely as a jumping off point for some impressive soloing. As with all the tracks on Sleight of Hand, Smyth’s guitar is a melodic instrument, not filigree. His sinewy lead lines function as would a lead vocal. He’s rarely showoff-y, and the licks are the sort one might try to sing along with.

The funk-jazz-fusion “Big Bertha” features a long and snaky guitar figure as its focal point. Loosely mounted in a blues format, the song is most definitely not a blues. Sympathetic backing instrumentation serves to move things along and showcase the lead, which is a perfect fulfillment of its role in this setting. A bridge changes the song’s feel completely, then it’s back into the main part of song. The lead guitar so well plays the role of lead vocal, that where the “guitar solo” part would normally go, Smyth plays differently. An overdubbed second lead guitar takes the place of harmony vocal. Smyth resists the temptation to overuse the technique, and his restraint is welcome.

“Brother Ray” starts off with a saxophone lead. While it’s not as effective as his playing, what is remarkable is the manner in which the lead line switches from sax to guitar; it’s so seamless, and so sonically related, that listeners might miss the changeover. When the guitar and sax harmonize, it’s a perfect blending. An electric piano bedding keeps the track nice and organic; and it offsets the slight 80s-ness of the saxophone.

The ghost of Stevie Ray Vaughan makes an appearance on the intro to “Dancing Skeletons.” While its overall arrangement has more in common with Jeff Beck — especially Smyth’s agile and tasteful use of wah-wah pedal — the tune hold charms for any fan of Beck’s 70s work as showcased on the aforementioned Wired and Blow by Blow.

The track “East West” shares nothing in common with the same-named 1966 track from the Paul Butterfield Blues Band. What it does have is a middle-eastern vocal wail that conjures images of Morocco (or someplace). A loping beat imbues the track with an appropriately “foreign” vibe. The guitar is less of a song centerpiece here, until the solo kicks in. The Gerry Rafferty-styled sax again seems ever so slightly out of place, but it’s not really detrimental. The track sort of falls apart at the end, but this seems by design.

The rhythm guitar on “5 Digit Password” is mixed a bit louder than the lead guitar, and that, too, seems intentional. Said rhythm axe doesn’t merely chug along; it slices and dices through the track, more than justifying its presence. The lead guitar still carries the melody, but like most cuts on Sleight of Hand, the backing is interesting enough on its own. It’s something of a testament to the arrangements that tasty backing and slinky leads don’t equal an overwrought result. But they don’t: everything is in its rightful sonic place, and enough “holes” exist to let the music breathe.

The goofily-titled “Boobs McGillicutty Rides Again” has the subtle presence of what sounds like mandolin, but the disc’s liner notes make no mention of such an instrument. The arrangement of the song isn’t far removed from what Mark Knopfler served up on some of his early solo work; in fact the track has a cinematic feel about it.

Speaking of visuals, not that I’m suggesting the Toronto-based axeman do so — I am certainly not — if he were to dial the energy down a bit, it would be easy to imagine hearing these tracks in the background while the local weather forecast scrolled across the TV screen.

“Vic Arpeggio” is the least among a disc of excellent tunes. Perhaps it’s down to the plodding tempo; the song begs to go faster. It’s delivered up with all the style and panache of the other tracks, but surrounded by more uptempo material, it suffers in comparison. It’s not bad by any measure — it features some of Smyth’s most expressive soloing. In the end it’s less a song than a showcase for Smyth’s lead guitar. And plenty of instrumentalists build entire albums around such tracks. Smyth doesn’t.

The atmospheric “Curves Ahead” includes the heaviest backing. It’s not heavy in the hard-rock sense; the song just mixes a meat-and-potatoes bass line more to the fore. Harmonized guitar leads are the highlight of the track, which in the end sounds less Beck-like than the first half of the disc. Smyth’s deft employing of a variety of tones and stylistic approaches make the song sound as if it features several guitarists, all dueling for supremacy. Let’s call it a tie.

“Righteous Dude” wraps up the disc. Kicking the tempo back into high gear, the second guitar (it can’t fairly be called rhythm guitar) cuts a precise figure that sets up the entry of a soaring lead line. Evoking a film’s end-credits, “Righteous Dude” effectively recapitulates all of Sleight of Hand‘s ideas into a single tune. It even features the sax again. An extremely apt and effective way to end a consistently enjoyable set, “Righteous Dude” runs, slashes and leaps. Great stuff, recommended.