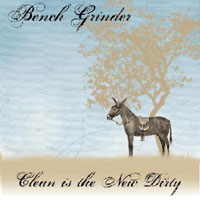 If Jordan Oakes were still compiling editions of the legendary Yellow Pills series, “Ride With Me” from Bench Grinder would merit serious consideration. High-energy powerpop in a 90s vein, the track has hooks and enough variation to make the cut.

What the track lacks is professional-grade production. All the elements are there, but the way they’re combined, the ingredients don’t meld as they should. Like a lasagna right out of the oven, everything’s there, but it’s just not quite ready. At the risk of belaboring the food metaphors, all the tracks on the Clean is the New Dirty EP are better than half baked, but fall short of well done.

If the songs weren’t as hooky as they are, I’d have skipped this review entirely; I have little interest in writing wholly negative reviews (though if you like that sort of thing, here’s one you might enjoy). The four songs warrant more careful treatment. Don’t get me wrong: the production isn’t awful, it’s not lo-fi, and it’s not a painful listen. It just isn’t up to standard. Here’s betting that they’d be very good live. A live-in-the-studio recording (which this most assuredly is not) might have captured the energy I suspect they possess.

While the group’s name might conjure images of a metal or hardcore band, Bench Grinder seem more influenced by the Raspberries and Cars. Especially on “Regular Girl,” the monosynth lines are used to positive effect, and the spare arrangements highlight the hooks. Up-front bass licks punctuate the song, and a jangly guitar with just enough distortion fits well.

“You Were Wrong” sports a jaunty country-rock vibe. But when the rhythm guitar kicks in, it sounds tacked-on. Again, nothing wrong with its inclusion, but the way it’s done just doesn’t work. A more skilled or experienced producer probably wouldn’t have vetoed the rhythm guitar, or even changed its sound. But he or she would have found a way to better integrate it into the song.

Apparently the Seattle-based group decided that four standard-length pop songs made too short of a disc. Their solution? Add instrumental versions of the four songs. Not remixes, they’re simply the tracks with the faders pulled down on all the vocals. Pointless, really: this music isn’t exactly King Crimson‘s Red. Listeners don’t need to get up close and personal with the instruments. The music is about songs. And these instrumental tracks serve only to point out the production shortcomings, some of which are, as it turns out, covered up by vocals.

In sum: Good songs in need of (a) more good songs and (b) better production. Worth following, though. Apparently they have quite a back catalog, and I’m guessing it’s got a number of gems.