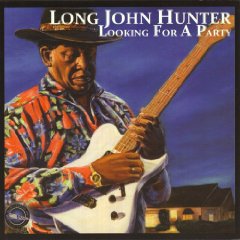 Modern blues records often suffer from a fatal flaw: those in charge of the production or arrangement aren’t always possessed of the requisite “feel.” The resulting product thus often contains elements that don’t mesh well with the blues format: maybe it’s synthesizers, or sampled horn charts, or production flourishes that simply don’t work. Sometimes producers and arrangers tell themselves, “yeah, what this artist needs is a little bit of…updating. And I’m here to help.” When that happens, it’s generally (but not always) an unmitigated disaster at worst, and simply uninspiring, a wasted opportunity at best.

On Looking for a Party, Long John Hunter‘s latest release, these potential problems are largely avoided. The opening title track features a horn section, but they’re real horns; tasty ones at that. As often works for music of this idiom, the production has a very “live” feel about it; except for the lack of an actual audience, the vibe is very much a live-in-the-studio one.

If you’ve never heard Hunter, the first song’s arrangement — which gets going well before he opens his mouth — might lead you to expect him to wail or roar, but his vocals are more understated than that. His swagger is pretty much delivered via six-string.

“What’s Come Over You” features a piano line that seems a bit forced; in one sense it’s a clever sub-melody, but it doesn’t really seem to belong to the song. It ultimately detracts from the tune, but the track is worthy enough to survive the misstep.

Sometimes blues albums don’t serve up enough variety: you often have one featured artist — usually a guitarist/vocalist — and that performer only has so much range. After a half dozen songs or so, the sonic palette has pretty well been explored, and things get redundant. Hunter manages to avoid this trap, too. The arrangements cover a number of different styles.

“Beggar Man” actually manages to include a bit of synthesizer, playing the role of what in the 70s they used to call a “string machine”. A real string section might have been more effective, but then there are always budgetary concerns to be dealt with.

Even though the just-shy-of-eighty Hunter is a product of West Texas, he’s most effective on Looking for a Party when he’s playing in a vaguely New Orleans style. “Looking for My Baby” is a loping number that features Hunter’s lean lead guitar runs over a sawing arrangement.

“I Know a Man” — one of two numbers on the disc composed by Hunter’s wife Gayle — heads into gospel-blues territory and does so effectively. “Apple of My Eye” is a fast shuffle in the “Hey Bartender” mold.

There are no blues standards on Looking for a Party. In fact producer Dennis Walker had a hand in composition of nine of the disc’s eleven tracks, most often with rhythm guitarist Alan Mirikitani. Hunter himself has writing credit only on the title track.

Hunter’s recording career began in 1954; the disc’s liner notes offer up an informative and entertaining thumbnail survey of his career, with plenty of first-person reporting to keep it real.

This disc isn’t quite incendiary — it’s made by a man born in 1931, after all — but it’s an enjoyable journey through the electric blues, played with heart and conviction.