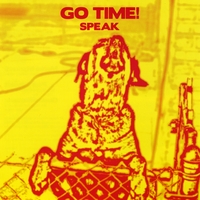 There’s a quality to the audio and arrangements on Speak, the self-released disc from Chicago-area Go Time!, that evokes 1983. More than anything else, this outfit sounds like an indie band (though the terms wasn’t in wide use in those days) from the early 80s. The unadorned recording isn’t quite lo-fi (think: Guided By Voices) but neither is it slick. They seem to be aiming for a sound close to what Mitch Easter gave REM. But then that may be more a function of technical limitations. Either way, it’s not at all unwelcome, but it does imbue the disc with a sort of dated vibe.

Go Time! (not to be confused with innovative indie rockers The Go! Team) songs are primarily written around a couple of catchy riffs, and what few effects they do employ are more of the pedalboard variety than the recording console type. “Rust to Rust” sounds more like REM onstage in ’81 than, say, REM on vinyl in that same period. The group’s meat-and-potatoes delivery isn’t flashy: there’s the occasional fast guitar lick, but for the most part these guys are just rocking out.

If there’s one other band whose spirit hangs over the proceedings, it’s the Flamin’ Groovies. “Broken Retrofit” sounds a lot like an outtake from those underground heroes’ Shake Some Action era. As the disc progresses, the country influences (actually cowpunk might be a more apt touchstone) come to the fore. “Wait and See” starts out suggesting that the group is seeking a Who vibe, but the song quickly moves toward the south, with lyrics that evoke “Free Bird,” of all things. How appealing you find that idea will certainly influence your enjoyment level of this disc.

“Hey Day” throws a bit of variation in to the mix: some metallic guitar and a bit of Farfisa-styled keyboard, but with that exception Speak colors within the lines, so to…speak.

Usually albums are front-loaded, with the best or most viable songs up front. Speak holds a surprise, in that “Just Don’t Know Why” amps things up ten tracks in. And “About Me” (the eleventh track) straddles cowpunk and surf. In fact the guitar lines on “About Me” somehow manage to sound a bit like a honking horn section. And — another surprise — near the end of the disc we find “Wander Alone,” the sole lead vocal outing from the group’s bassist. It sounds even more like the Flamin’ Groovies than does “Broken Retrofit.” With its woodblock percussion and chiming guitars, it’s the best track on Speak. And then really close to the end we get “Cost,” a homage (I guess, and hope) to sixties garage/psych bands like The Standells and Electric Prunes. Why this cut wasn’t put at the front of the disc, I’m left to wonder. Placed as it is, the track seems tacked on, an afterthought.

Verdict: a promising start, docked for a seeming lack of ambition and borderline-weak vocal delivery. The group fails to establish a firm identity of its own. Resequencing of the tracks could have resulted in a much stronger disc that would play up the band’s strengths and downplayed its limitations. Still, Speak is worthwhile for fans of the style looking for more of it.