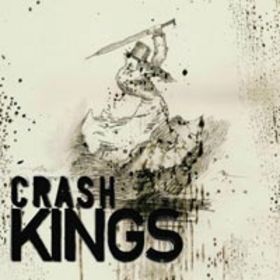 Weird. When “Mountain Man” — the opening track on Crash Kings‘ self-titled album — kicks off, it sounds like a song you haven’t heard by Wolfmother, albeit without a bunch of guitar. A trio employing the instrumental setup that served Ben Folds Five so well (keys/bass/drums), Crash Kings manage to sound not all that much like Ben Folds. Antonio Beliveau is possessed of pipes that can sound like an American Andrew Stockdale. And when the harmonies kick in on “1985” the group sounds a lot like Fall Out Boy, but with hints of Wolfmother and Gershwin thrown in.

That might sound unappetizing in print. It’s not. This is upbeat, adrenaline-fueled music. Possessing just a hint of restrained grandeur, the songs on Crash Kings suggest that the group is trying hard to straddle operatic ambitions with a desire to just plain rock out. And they succeed in a way that, say, Queen couldn’t always manage. The songs encourage sing-alongs, air guitar and air piano.

There’s an authenticity to the songs that evokes some of the best work from Lee Michaels, and songs like “It’s Only Wednesday” evoke unheralded pop sensation Owsley. (If you love powerpop and you don’t know who Owsley is, find his self-titled album — a cutout bin dweller — and treasure it.)

Crash Kings dial things down on “Come Away,” a song that makes good use of a lovely string arrangement. “14 Arms” sounds like Jellyfish at their hardest-rocking (think, “All is Forgiven” from Spilt Milk). “Raincoat” adds in hints of funk and prog while maintaining a melody of the sort that Elton John probably wishes he could still write. On the melodramatic “Saving Grace” the Wolfmother vocal delivery returns, applied here to an odd time signature that still manages to maintain a pop sensibility. The disc wraps up with “My Love” (not the McCartney classic), a mid-tempo song that features plenty of dynamics.

No song on the disc sounds like any other. This is a fully-realized debut disc. True, with his “punk rock for sissies” Ben Folds proved you could rock out without guitars, but he gave up on that and moved on to a (less successful) solo career that allowed the use of guitars. Crash Kings pick up the gauntlet and apply it to their own vision. In a just world, this album would be a huge hit, and we’d all eventually be getting sick of hearing these catchy, heartfelt songs ad nauseum on the radio. This is wide-screen pop grandeur with muscle, and the album improves with each successive listen, as it sinks in that these guys have crafted a consistently entertaining debut work. As with most debut albums, we can only wonder if the group will be able to deliver a worthy follow-up. Or, more immediately, if this album will sell in a market dominated by lesser offerings. In any event, file Crash Kings under Highly Recommended.