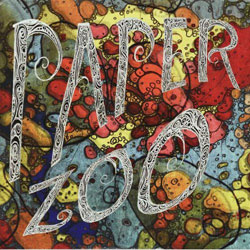 I, for one, don’t really think of Bigelf‘s Damon Fox as any sort of grand old man of rock and roll. But I suppose if you’re a young band like Paper Zoo, then the talented Fox might come off that way. The story holds that this L.A. based quartet (originally a trio) caught the attention of Fox, and he took them under his wing, securing them a deal with Linda Perry’s Custard Records.

Fox’s seeming influence is all over Paper Zoo’s debut EP We Are Paper Zoo. In many ways, the five tracks look to a wide range of influences, but the sound is filtered through a sensibility familiar to anyone who’s heard Bigelf. Fox produced the disc, after all.

The song “Paper Zoo” is a musical invitation: “join us, we are the Paper Zoo…”) and it takes an approach best described as Magical Mystery Tour meets Sweet. Barrelhouse-style pianos and a dozen or so people clapping during the song’s fadeout show that these guys have listened to some vintage vinyl.

“Hollywood Recluse” features a rocking guitar figure and vocal phrasing that conjures memories of “Come Together” and Frank Zappa‘s “Cozmik Debris.” As with most of the songs on the EP, the track makes ample use of a wide variety of keyboard sounds. Originally a trio, Paper Zoo added keyboards at Fox’s urging.

“Laughing Legba” finds Paper Zoo at their most Bigelf-ish (Bigelvish?). The song features a “21st Century Schizoid Man” vocal treatment wedded to a song that effectively combines elements of Jethro Tull (without the flute) and Queen.

“Black Cat” has a showbizzy ambience straight off an Alice Cooper record from the 70s. “The Sun” puts Wurlitzer (and all three basic Mellotron sounds) way out front, conjuring up sounds a bit like early (just-post-Roy Wood) Electric Light Orchestra.

In total, We Are Paper Zoo represents a promising start. The band supported Roger Daltrey on his fall 2009 solo tour, exposing themselves to an audience that likely appreciated their classicist approach. It will be interesting to hear what the band comes up with for a full-length: Can they expand on their sonic palette? These five songs don’t go far enough in establishing the band’s musical identity. I’m willing to put that down to the brevity of the EP format, and the fact that it’s really a demo rather than a proper album. Stay tuned.