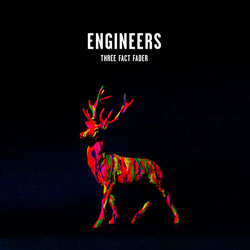 If you toss shoegaze and electronics into a blender, you might expect the result to be unappetizing. But a listen to Three Fact Fader, the 2009 release from Engineers, might give you reason to reconsider. The thirteen- track album is full of gauzy textures that will remind some listeners of My Bloody Valentine. But the beeping, seems-like-sequencers-or-arpeggios-but-aren’t accompaniment has more in common with electronica.

You won’t find any shouted vocals on Three Fact Fader. In fact, for most of the album, it’s pretty easy to imagine singer Simon Phipps remaining seated. But that’s not to suggest that there isn’t power in the music. There is, but it’s conveyed through the steady instrumentation. The songs don’t stray too far; like a lot of popular music, they stake out their territory in the first minute or so and then pretty much stick to it. But the songs are never boring. They offer up dreamy textures, and in some ways they’re a modern, more tuneful take on the sort of sound the Jesus and Mary Chain once produced.

While none of the songs are weak, the album is most effective as an evocative soundtrack. (To what, you may well ask. I dunno.) The music is designed to wash over the listener, rather than simply enter though the ears. There are mid-tempo songs (though one titled “International Dirge” is in fact one of Three Fact Fader‘s peppier numbers) and there are slow ones. In fact, “Helped by Science” approaches space-rock territory. Texture is an overused word, but its use here says more than any other words in conveying what listeners can expect from Three Fact Fader. There’s a trance-like aura to many of the songs on the album; the repetitive piano trilling on “Crawl from the Wreckage” sets the scene, and then faraway distorted guitars crash like waves on a sonic shore. The sequenced bass lines on the title track subtly evoke 80s artists like Thomas Dolby without really referencing or sounding like such a thing.

“Emergency Room” sounds a bit like what Coldplay might turn out if Brian Eno produced their albums*; the nearly song’s cymbal-free percussion propels the song. For its nearly five minutes, the track seems to be building tension toward something, but that something never comes, and that lack of denouement seems completely intentional. The first half of “The Fear Has Gone” sounds like — wait for it — Sufjan Stevens. But then it blasts forward like Quadrophenia played at maximum volume…on a stereo a block and half away.

“Be What You Are” is a rarity on Three Fact Fader: it makes use of acoustic guitars and harmonies that sound a tiny bit like Crosby, Stills and Nash. Its sequencing near the end of the album is inspired; it gently returns the listener to earth after an hour of gazing at ones’ shoes and taking trips to space. The album ends with “What Pushed Us Together”, a tune that features arpeggiated synthesizer lines that sound straight out of a 70s rock album by Argent, Kansas or Elton John. Actually, it evokes “Lido Shuffle” by Boz Scaggs(!) And the drums rock more than anywhere else on the album. But the intentional feeling of stasis keeps things from getting out of hand.

Not an album to engender wild abandon or fist-pumping, Three Fact Fader is nonetheless an interesting record full of (I’ll say it again) textures. The melodies may not leave strong and indelible memories in the listener’s head, but they still make for a pleasurable experience.