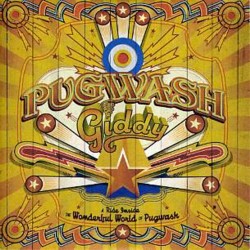 It’s a bit like being a kid again, coming into the living room on Christmas morning. That’s as apt as any a metaphor for the initial listen to Giddy, a best-of compilation by the best Irish group since The Boomtown Rats.

By most accounts, Thomas Walsh simply hates the term Beatlesque. And ELO-esque or XTC-esque are terms that simply don’t roll off the tongue. So let’s just say that Pugwash — which is a nom de pop for Walsh (plus, sometimes, other guys) — is part of that proud tradition of incredibly catchy, finely wrought music that isn’t afraid to have itself labeled pop. Plenty of artists these days (any day, in fact) are too hip to write a song as winsome as “It’s Nice to Be Nice”. But not Walsh, not Pugwash. Thank goodness.

Pugwash has released four albums since 1999, but all are impossibly rare, especially Stateside. Andy Partridge (formerly of XTC) has signed the group to his Ape House label, and the first fruit of this new union is Giddy, an overview of those earlier albums.

Walsh likes his Mellotron and his Chamberlin, but his use of those instruments has more in common with, say, Michael Penn than, say, King Crimson. Walsh is unafraid of the powerpop label; his choice of guest stars says as much about his musical affinities as anything: in addition to Andy Partridge, heavyweights including Dave Gregory (XTC), Jason Falkner, and the aforementioned Michael Penn all help out at various points. Stylistically, Pugwash straddles modern and retro; the vibe of the old stuff is clearly evident, but looping and other more modern touches sit nicely alongside Walsh’s more traditionally-minded approach. This is music that deserves a wide hearing.

The songs on Giddy have that particular vibe unique to the British Isles: sunny, but with a spot of cloudiness. The mid-tempo songs rock enough to incite head nodding, but the hooks and melodies keep the tunes firmly in pop territory. Walsh employs a wider stylistic palette than labelmates the Milk & Honey Band (who released an underrated compilation of their own a few years back). If you can imagine mid-period ELO (A New World Record through Out of the Blue) with a bit less bombast and without the wind-up drums, that is a reasonable touchstone for Pugwash’s sound. “Mid-period”, in fact, is a good descriptor for a lot of Pugwash’s songs on Giddy. Clear antecedents include mid-period XTC (Mummer through Nonsuch) and mid-period Beatles (oops, we’ll let that one pass by so as not to rile the Dubliner).

Picking favorites from Giddy is a pointless exercise; this reviewer has developed a particular affinity for “My Genius” and “Anchor” but every pop-centric listener will find something to love. Incidentally, while both of those two cuts were co-written with Partridge, one should not infer that Walsh’s solo-written songs are of a lesser sort.

A mere thirteen Pugwash songs on the disc will inevitably leave the listener unsatisfied: “Give me more, and now!” Three of Giddy‘s tracks are taken from the group’s 2008 release Eleven Modern Antiquities; that album is scheduled for a re-release on Ape House in 2010.