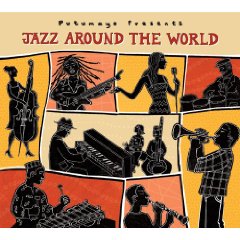 Putumayo’s top-selling India surveyed pop styles of that country. This, their other high-profile release of 2009, is Jazz Around the World. The sleeve describes it as “original songs and standards performed by musicians from Cuba to Cameroon.”

Chantal Chamberland starts things off in slightly familiar territory: the French Canadian chanteuse sings “La Mer” accompanied by a tasteful jazz quartet. The melody is better known to Americans as Bobby Darin‘s “Beyond the Sea” but the liner notes (always a Putumayo strong suit) tell us that these lyrics are the original, and are radically different.

The sounds put forth on Jazz Around the World are vaguely reminiscent of Burt Bacharach, Sergio Mendes and similar lite-pop of the 60s and 70s. There’s nothing here that will knock listeners on the head, and that inoffensiveness is certainly part of the disc’s goal.

Jazz Around the World is best used as background music to a candlelit dinner, though this writer can report that it’s a fine accompaniment to morning coffee. The songs are interesting enough to bear closer scrutiny, and as always, Putumayo packages the disc with enough information to facilitate that. For the listener whose musical experiences haven’t expanded much outside the Western mainstream, Jazz Around the World is as good a starting place as any into the musical world of…world music.

Jazz Around the World makes the unspoken case that music truly is the universal language; there are clear sonic connections between the music of artists from New Zealand, Mali and Cuba. Every note of every song is impeccably played, and even though the styles vary, the song selection and sequencing guarantees that no jarring shifts will upset the listener.